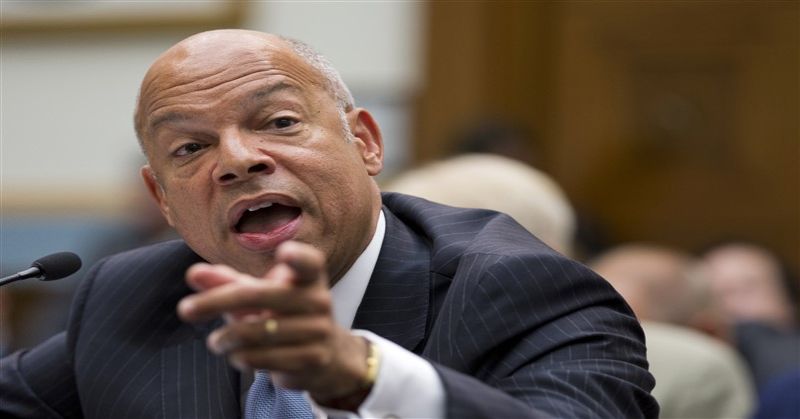 The agency is looking to soon enter the gun control business, a diversion into domestic enforcement for an agency tasked with fighting terrorism.

Speaking about the Orlando massacre on a network television news show, the DHS commandant announced that the gargantuan government agency created in the aftermath of 9/11 to help keep us safe is poised to become an enforcement arm for Democrats seeking to disarm Americans.

The Obama regime and Democrats in general have moved swiftly after Muslim madman Omar Mateen’s killing spree to drive the media narrative that the heinous attack at the Pulse nightclub was the result of lax gun laws instead of radical Islam.

When it comes to protecting the United States from the threat of terrorism, gun control is now a critical component, Homeland Security Secretary Jeh Johnson said Tuesday.

“I am not anxious to plunge into yet another difficult, contentious issue like the ones I already have. I do believe, however, that meaningful, responsible gun control is now part and parcel of homeland security,” Johnson said on “CBS This Morning.” “It’s critical to public safety, but we have to face the fact that meaningful, responsible gun control has to be part of homeland security as well, given the prospect of homegrown, home-born violent extremism in this country. We’ve seen this now with Orlando, tragically, with San Bernardino. It’s something that I think the American public and the Congress has to face and has to address.”

the Cabinet secretary charged with protecting the domestic United States, Johnson said, “I believe that meaningful, responsible gun control is part of homeland security. It is something we have to address.”

I have not talked about gun control publicly at this point,” Johnson said, repeating, “I think that we have to face the facts that gun control is part and parcel of homeland security and how things are evolving.

Things are not “evolving” in a manner that is consistent with a free society nor one that honors the intent of the Founding Fathers. Back when the mammoth DHS was created, the more cynical among us saw the agency as not being as much about preventing terrorism than that of a rogue government taking advantage of a good crisis to vastly expand its size and power.

As the agency now transforms into a gun-grabbing Gestapo, it would seem the cynics were right.

In a perfect world the Department of Homeland Security would be working to keep the terrorists out of America instead of keeping guns out of the hands of law-abiding Americans. Too bad we don’t live in that world.

Those creeping cat’s feet of fascism are growing louder by the day.