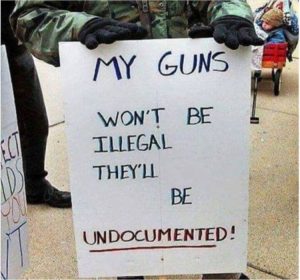 Brian Thomas reports permitless carry laws, also known as constitutional carry, allow anyone who can legally own a firearm to carry their gun however they choose.

Some states require special permits for concealed or open carry, even for people who can otherwise legally own their firearms.

People who want to exercise their right to bear arms must go through  several hoops to do so. Meanwhile, nobody needs a “free speech” permit.

Wisconsin is now considering their own constitutional carry bill, as Bearing Arms reports:

Constitutional or permitless carry removes that potential problem by allowing anyone who can legally own a firearm to carry that firearm in any manner they so choose. Makes sense. That whole, “the people’s right to keep and bear arms shall not be infringed” thing and such.

It’s worth noting that this issue typically focuses on concealed carry as most states already have a provision that permits the open carry of firearms.

The bill now goes to the full Wisconsin Senate for consideration. If it passes there, it will go to the Assembly.

If Senate Bill 169 is passed into law, Wisconsin will become the 13th constitutional carry state.

The National Rifle Association is strongly supporting the bill in Wisconsin and similar pushes for constitutional carry throughout the country.

Senate Bill 169 was crafted earlier this year. It was introduced by Sen. David Craig, state Rep. Mary Felzkowski, and a whopping 39 co-sponsors.

“We already give people the ability to openly carry a firearm without a license,” Sen. Craig said in a statement when announcing the legislation. “With this bill, law-abiding citizens will have the same right to carry discreetly that they currently have to carry openly.

“If you decide to throw on a coat, you should not be considered a criminal.”

In truth, the Wisconsin legislation simply recognizes a law-abiding adult’s unconditional right to keep and bear arms for self-defense in the manner he or she chooses, while doing away with government licensing and taxing of a constitutional right. Consider that there were only six states that recognized permitless carry on Jan. 1, 2016, compared to the 12 that have such laws now.

The number of permitless carry states has doubled since the beginning of 2016.

If Wisconsin passes the new bill into law, that may pave the way for other states to make their own efforts for permitless carry.