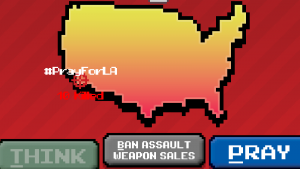 Nothing makes liberals happier than bragging about their imagined moral superiority to conservatives, no matter the facts. And a new left-wing computer game is making waves doing just that, exploiting the recent shooting in Orlando, Florida to push gun control.

Thoughts and Prayers: The Game is a 30-second-long game playable in your browser for free. It shows a map of the United States, with targets and death tolls popping up all over it to represent recent mass shootings.

The screen has three buttons: “Think,” “Pray,” and “Ban Assault Weapon Sales.” The first two do nothing, and the third just brings up sarcastic messages like “That’s Unamerican” and “You Don’t Have the Votes.”

The message is obvious: conservatives and Republicans offer victims of gun violence nothing but ineffective sentiments, while refusing to consider the one policy that would actually save lives. However, as usual, none of the facts back up the condescension on display.

First, the game’s solution wouldn’t have prevented the Orlando massacre, either. What liberals mean by “assault weapon” is nothing more than a gun with any number of cosmetic differences, like detachable magazines or collapsible stocks, that don’t actually make the gun any more dangerous than a hunting rifle. Many specifically called for banning the AR-15, even though gunman Omar Mateen didn’t actually use one.

Second, since the shooting, conservatives have been talking nonstop about all the thingsin addition tothoughts and prayers we should be doing to prevent tragedies like this, and nearly everybody who’s been promoting this game knows it.

Drew and his signifiant [sic] other Juan were both killed and I hope my son was taken quickly and without suffering. I hate to imagine some of the victims being terrorized for hours, because this armed killer was allowed to play God and exterminate them at will and in his own time schedule.

The killer was armed and his helpless victims were not, yet the anti gun politicians still want to disarm the populace, enabling these scenarios. It is likely such attacks will continue, until the victims start shooting back. That’s the lesson I take from this, for what it’s worth. When the shooting started Saturday night, I’ll bet there wasn’t a person in the club who wouldn’t have traded everything he owned in the world, for a loaded gun.

RELATED: Hillary Says Gun Control Is Necessary to Stop Terrorism, But There Are HUGE Problems

If liberals were willing to discuss any of the above, we might actually prevent America’s next mass shooting. Unfortunately, they aren’t interested in anything but disarming the public and demonizing anyone who resists. It’s another reminder that those who brag the most about their character usually have the least to brag about.