MSNBC just discovered that even their viewers are strong supporters of the Second Amendment and the right of honest citizens to carry guns in public.

Directed by the networks hosts to an online poll about gun rights, the results overwhelming support the right to carry. 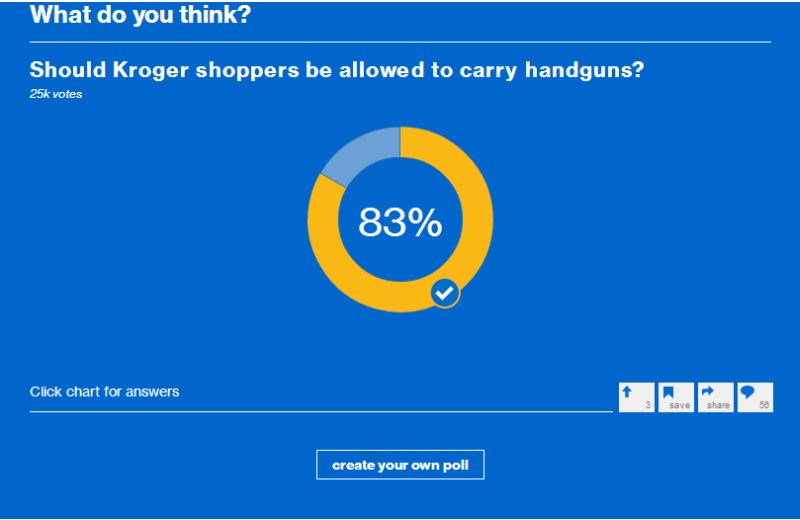 The question was: Should Kroger Shoppers be allowed to carry handguns?

With more than 25,000 votes so far, 83 percent answered “Yes, it is a Constitutional Right and only 17 percent responded “No, it is a threat to public safety.”

Comments on the liberal site were also a bit surprising, and I’m certain, not what MSNBC expected. Here’s asample

I’m black and I carry. Nothing negative has happened to me because of it.

Kroger SELLS guns. Every Fred Meyer (Kroger) where I live sells guns, including AR-15s. For all this hullabaloo, how many accidental discharges have there been at Krogers across the nation? Or is this just “be hypothetically afraid?

Being Pro-Constitution and Pro-2nd amendment if I have a legal right to carry, have the required training and license yes. Criminals have neither the training nor the license and will do it anyway.

Frankly, in regards to Kroger’s pending decision as to whether customers should be allowed to carry guns in Kroger stores, it’s really ignorant to think that a citizen *legally* carrying a handgun is a danger to anybody but a person trying to commit a crime.

While some of the people commenting opposed shoppers carrying guns into Kroger the majority on this very liberal site supported an honest citizens right to keep and bear arms.

What do you make of this?