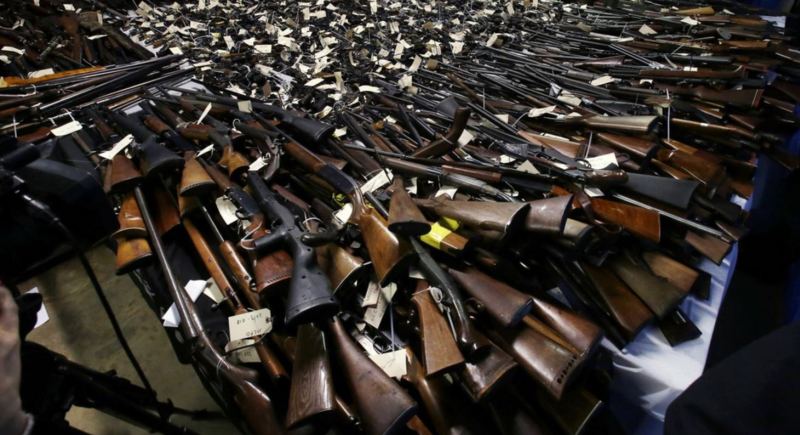 NJ.com, a consortium of newspapers in the state has published an editorial calling for the elimination of the Second Amendment through mandatory gun buybacks:

Having fewer guns lying around could mean they won’t end up in the hands of a curious child, abusive spouse or suicidal person. Having a gun at home makes it three times more likely that you’ll be murdered by a family member or intimate partner, or successfully attempt suicide.

But let’s not kid ourselves: Gun buyback programs are not going to reduce murders in cities like Newark and Camden. Studies have found that buyback programs don’t have much effect overall on either gun crime or gun-related injury rates.

They don’t directly target the guns that are more likely to be used in violence, and in general, the guns collected haven’t overlapped much with crime guns. These are old weapons that some middle-aged guy found in his basement. What criminal is going to trade in his $700 Bushmaster for $250 from the state?

The biggest problem with this approach, though, is that it tiptoes around the one reform that could really make a difference, but that Americans would never accept: Mandatory gun buybacks. That’s what Australia did, after its own version of Newtown.

Following a mass shooting in Tasmania that left 35 dead, Austrialia banned semiautomatic and automatic rifles and shotguns, and required all the newly banned weapons to be bought back by the government. This cut the number of gun-owning households by as much as half.

The mandatory buybacks were also accompanied by a uniform national system for licensing and registering firearms. Gun owners have to present a “genuine reason” to buy a weapon. A claim of self-defense isn’t enough unless you have an occupational need to carry a gun.

The writer ends the op-ed by stating the obvious “We understand this is not going to happen. Neither American courts nor most of the public would support it.”

While liberals know that gun confiscation is not going to happen in America, there is no question they would like to see it happen.