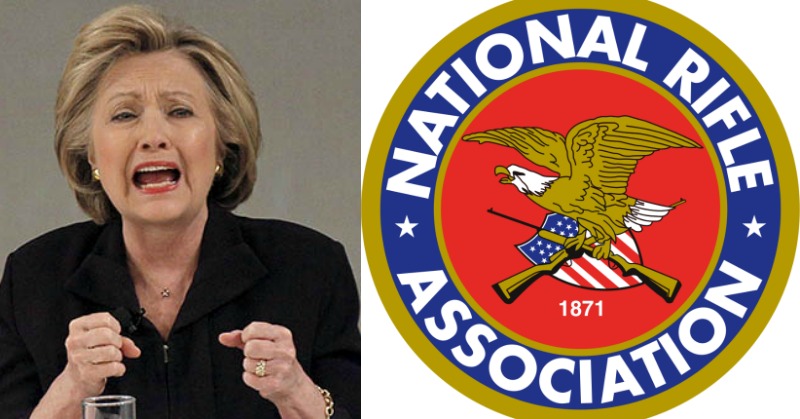 Fact-checking has gained a great deal of attention lately with liberal fact-checking organizations serving more as mouthpieces for the Democrats than as actual fact-checkers. For example, PolitiFact recently gave the NRA a “mostly false” rating for quoting words that came directly out of Democrat presidential nominee Hillary Clinton’s mouth.

The NRA sent a flier out in October that asked: “What did Hillary Clinton say when she was asked about gun confiscation in America?” according to the Washington Examiner. The flier went on to answer the question with Clinton’s own words: “I think it would be worth considering doing it on a national level, if that can be arranged.”

Warren Fiske of PolitiFact worked to explain away Clinton’s answer to a question about Australia’s gun buyback program (which was mandatory) at a town hall a year ago in New Hampshire and whether or not the program could be implemented in America.

Fiske claimed that the context of the question made the NRA’s claim “mostly false” but, as you’ll see, Fiske’s assertion is “completely false.”

Clinton was asked the following question at the town hall: “Australia managed to take away tens of thousands — millions — of handguns and in one year they were all gone. Can we do that and why? If we can’t, why not?”

“In the Australian example, as I recall, that was a buyback program,” Clinton said. “The Australian government, as part of trying to clamp down on the availability of automatic weapons, offered a good price for buying hundreds of thousands of guns and then they basically clamped down going forward in terms of, you know, more of a background check, more of a permitting approach.”

Clinton continued, “But they believed, and I think the evidence supports them, that by offering to buy back those guns they were able to, you know, curtail the supply and set a different standard for gun purchases in the future.”

Here’s where the NRA got their quote, straight from Clinton’s mouth:

Now communities [in the U.S.] have done that; communities have done gun buyback programs. But I think it would be worth considering doing that on the national level if that could be arranged.

Clinton referenced the Obama administration’s failed “cash for clunkers” program as an example of a buyback program to bolster her assertion that the idea was “worth considering.”

She reiterated her stance: “I don’t know enough details to tell you how we would do it or how it would work. But certainly, the Australian example is worth considering.”

PolitiFact, instead of actually fact-checking, went on to explain away Clinton’s comment and provide context that they apparently thought would ameliorate it. According to PolitiFact, the comment by Clinton was a reference — albeit jumbled — to a “voluntary program,” and not a mandatory gun buyback program.

The problem, as pointed out by the Examiner, is that the Australian program Clinton specifically called “worth considering” was mandatory.

Clinton’s comments could have been jumbled — she did claim that she didn’t “know enough details,” and referenced the voluntary cash for clunkers program; however, NRA’s claim was true, not “mostly false,” as PolitiFact dubiously claimed.

More importantly, the context is more likely to bear out the NRA than Fiske. It’s very likely that Clinton has attempted to pull the wool over American’s eyes, and highly unlikely that she doesn’t know exactly what she wants to do and her comment at the town hall was a slip.

Clinton knows that Americans won’t respond favorably to a mandatory program, but if she can cloak it as “voluntary,” that can be the first step toward disarming Americans and dismantling the Second Amendment.

Just like Obamacare’s mandate along with the lie that it would be affordable and you could keep your doctor — it’s all smoke and mirrors so that left-wing progressive radicals can fundamentally transform America.