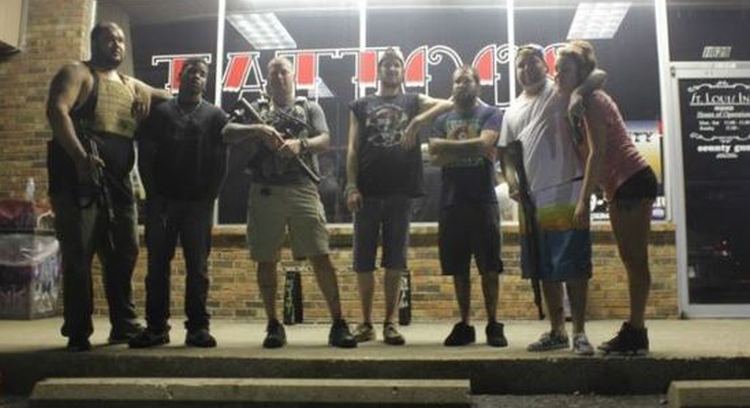 Back in August during the first round of riots in Ferguson a strip mall was saved from looting and destruction by a brave group of men (pictured above) armed with guns:

Nobody is robbing St. Louis Ink Tattoo Studio anytime soon. Or County Guns, for that matter.

The two north county businesses share a storefront in a Florissant strip mall less than ten minute drive from the epicenter of last night’s riots in Ferguson. After nightfall, what began as a community’s peaceful demonstration against the Ferguson Police Department’s shooting of unarmed 18-year-old Michael Brown turned increasingly violent. Crowds plundered a QuikTrip and burned it to the ground, and local news began reporting brazen raids on other stores in the area.

After hearing of the roving bands of looters, Mike Gutierrez knew he had to protect his tattoo shop. He brought a posse with him, including Adam Weinstein, owner of County Guns, who was acutely worried about criminals getting their hands on his merchandise.

The Gateway Pundit reports that this brave group was back last night and with some serious reinforcements.

Via the St Louis Post-Dispatch:

Along West Florissant just north of 270, in Greystone Plaza, about 20 men with handguns and AR-15 rifles stood around the perimeter of the parking lot, guarding the dozen or so stores.

They estimated that 100 cars had come by throughout the night, seemingly to check the place out, but turned away.

Mike Cross, the owner of St. Louis Ink at the plaza, said: “There’s nothing in this strip mall open, so you’re going to get scrutinized.”

The strip mall had been hit by vandals soon after the shooting in August.

The only thing that can stop bad men intent on violence is good men with guns. As Jeff Cooper said:

“The rifle itself has no moral stature, since it has no will of its own. Naturally, it may be used by evil men for evil purposes, but there are more good men than evil, and while the latter cannot be persuaded to the path of righteousness by propaganda, they can certainly be corrected by good men with rifles.”

It always pays to be prepared to defend yourself and your property!