It’s no secret that pro-gun Americans are regularly the subject of pure hatred from the totalitarians on the Left, but the hate pro-gun women in particular receive is simply astounding.

There are certain female public figures in our society who ardently advocate for the right to bear arms. Some of them are survivors of rape who have taken to the public square to tell their story and advocate for prevention of such a horrific crime by carrying a handgun.

They encourage women to exercise their right to bear arms because they truly believe in women’s empowerment and preventing crime against women. But for some reason, this completely goes over the heads of some leftists, and they will often lash out in truly reprehensible ways against these women.

The Washington Free Beacon recently conducted interviews with four prominent pro-gun American women, and each of them detailed how leftists have threatened, harassed, stalked, and bombarded them for their advocacy. These four women are Kimberly Corban, Dana Loesch, Jenn Jacques, and Stacy Washington.

In interviews with the Washington Free Beacon, four prominent pro-gun women detailed the deluge of vitriol and attempted intimidation they face. Each shared their own experience with death and rape threats as well as threats and hatred directed at their children. Each explained how they’d been forced to involve law enforcement during credible threats to their safety.

All the women who spoke to the Free Beacon have had to alter their daily lives in order to minimize the risk that someone angered by their advocacy might find their homes or where their children go to school. They guard their social media accounts, remain keenly aware of their surroundings, and train their children on what to do in the case of a home intruder. Some of the women have even made efforts to disassociate their names from their property records due to harassment.

And, of course, they train with and carry guns.

Corban was raped when she was a sophomore in college back in 2006. Her rapist’s case is still making its way through the court system, but she has taken a stand publicly to prevent more women from becoming victims of this horrendous crime.

“I started speaking out on campuses before we even had sentencing,” she said. “My attacker was found guilty at trial and I released my name to the media immediately following that because I just wanted to help one person not have to go through the same experience I did. That’s what my mission in life has been ever since then. So, when I would go and speak on campuses or to groups, I was well received. I didn’t get the negative commentary or backlash. It was telling my story.”

She started receiving the hate when she became a solution-oriented activist, pleading with other women to carry a handgun for personal protection.

“I’ve been speaking out about sexual assault and rape and victim trauma for 11 years now, and it really wasn’t until I ‘came out’ as being conservative or pro-gun that I started receiving any backlash,” she explained. “It’s horrifying. It reinforces why I carry. Nothing about my message or my experience changed. All that changed was how other people were interpreting that.” 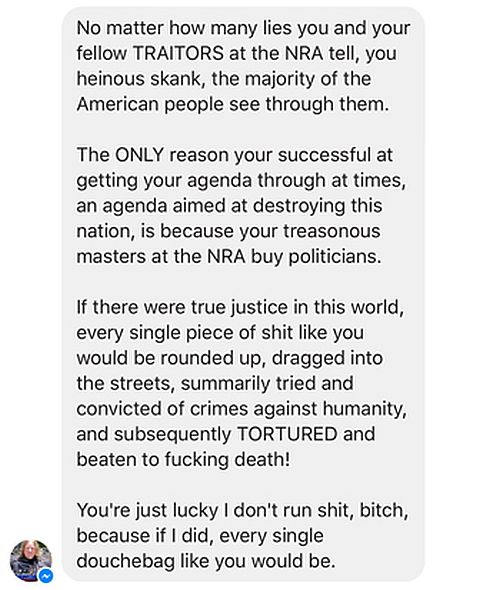 Dana Loesch was the subject of an astounding number of threats this year. In fact, it became so dangerous that she and her family had to move to a new location; yes, the credibility of the threats was actually that legitimate.

“In terms of threats, violence, at least every week there’s something and 99 percent of it I don’t take seriously,” Loesch told the Free Beacon. “Then when they get your cell phone number—that’s different. I was public about that which maybe I shouldn’t have been but I always think the best disinfectant is sunlight. Someone opened up an account on Twitter and their handle was my cell phone number. Then they were posting pictures of my house and saying the craziest, awful stuff.” 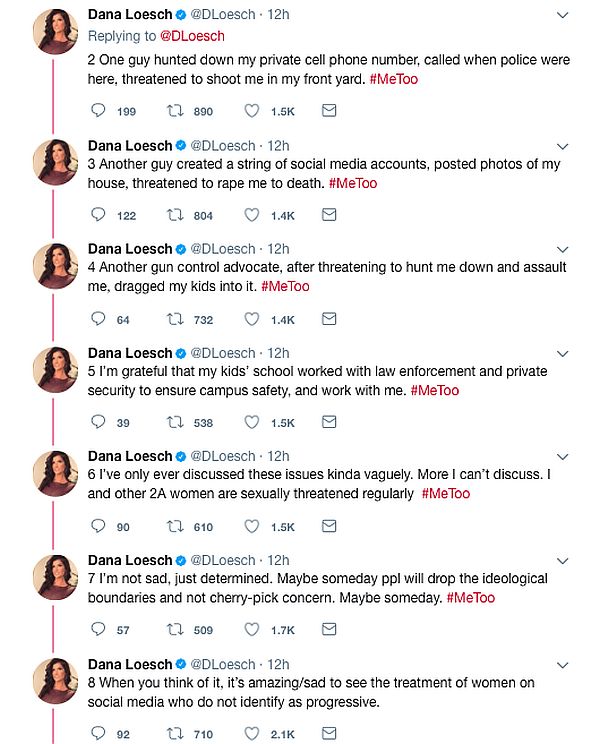 Jenn Jacques is a visiting fellow with the Independent Women’s Forum and editor at large for BreachBangClear.com. She has been recognized by the National Shooting Sports Foundation for her work promoting gun safety. Despite that, her opponents routinely spout the most reprehensible things at her.

“I’ve heard a lot of ‘do us all a favor and swallow your gun,'” she said. “It’s just so bad. The thing is they all claim to be against gun violence. They all claim to be the tolerant left but they are literally the most violent, heinous people out there. I’m sure a lot of it is that they’re hiding behind a computer screen.”

After Bob Owens, editor of Bearing Arms, committed suicide in May 2017, she received a slew of hatred in response. Things like “one down, one to go,” were routinely hurled her way, many of them telling Jacques she should kill herself as well.

“How could you say that to anyone?” she asked.

Additionally, Stacy Washington is a nationally syndicated radio show host who had her column suspended by the St. Louis Post-Dispatch after writing a column criticizing comparisons of the NRA to ISIS. For her, as a black woman, she states that her race adds a new level to the slander and threats she receives.

“I had this one guy who used to email me all the time and post on my YouTube videos,” she recalled. “He once accused me of being married to a white man and he wanted to rape me and my daughters.”

The hate that these women have received is simply appalling. For all the love and tolerance that the Left claims, they’re surely rather hateful and intolerant of pro-gun women. Many of them will talk about women’s empowerment and stopping rape, but will degrade and threaten women who dare to suggest that women could carry a handgun to protect themselves.

What kind of sickness is this? How miserable do these people need to be to lash out in such a way? It’s simply mind-blowing, and with people who react so violently, there is no reasoning with them. We can only pray for them, that their sick hearts will find healing.