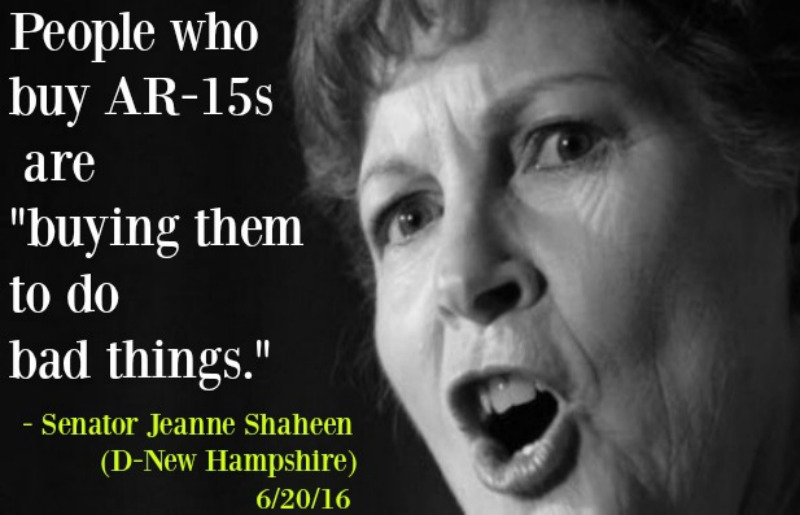 Last week we saw the ‘catered slumber party’ faux ‘sit in’ by ignorant and uninformed House Democrats in Washington D.C. These people pretended they were staging a ‘sit in’ to demand a vote on a gun control bill.

Of course, there was NO BILL TO VOTE ON, but neither the Democrats nor their left wing propaganda machines (aka the ‘lame stream media’) would bother telling you that. And of course, they were actually ‘sitting in’ to DENY the fundamental human right known as ‘due process of law’ in the United States.

HOWEVER, there has been a very eye-opening outcome as a result of this staged jackassery – politicians are finally telling the TRUTH about their intentions – they want to BAN certain firearms.

That’s right kids, Democrats who would have never said they wanted to ban any firearms before, are now coming clean and admitting what their constituents probably suspected all along.

New Hampshire’s pathetic Senator Jeanne Shaheen is one of them. Shaheen represents a state that was recently named one of the ‘safest places on planet Earth’ and consistently has some of the lowest crime rates per capita in the entire country.

Oh, and there are thousands upon thousands of New Hampshire residents who DEMAND their 2nd Amendment Rights. “Constitutional Carry” was passed twice in the past two years, but the gun grabbing governor (Maggie Hassan who wants to ban ALL semi-automatic rifles except those SHE deems legitimate for hunting) decided to veto the will of the people.

Democratic New Hampshire Sen. Jeanne Shaheen said certain types of firearms like the AR-15 are the kind of guns that should be banned. She added that people trying to purchase the weapon — which is popular among American gun owners — are “buying it do bad things.”

“The fact is, the AR-15, the gun that (Omar) Mateen used, that’s a weapon of war; it’s advertised as being able do technologically advances in killing people that previous weapons have been unable to do and somebody who is buying that kind of a weapon isn’t buying it for target shooting,” she said. “They’re not buying it to go out and hunt deer. You don’t need an AK-47 or an AR-15 to hunt deer. They’re buying it to do bad things and we need to recognize that and address it.”

Yes, Shaheen actually said that. She actually believes that THOUSANDS of her own constituents are going to do bad things with their AR-15s.

Of course, it doesn’t matter that the Islamic Terrorist in Orlando DIDN’T use an AR-15.

Unfortunately for Shaheen, STATISTICS show that not many people do bad things with AR-15s but they DO with hands and fists; knives and blunt objects: 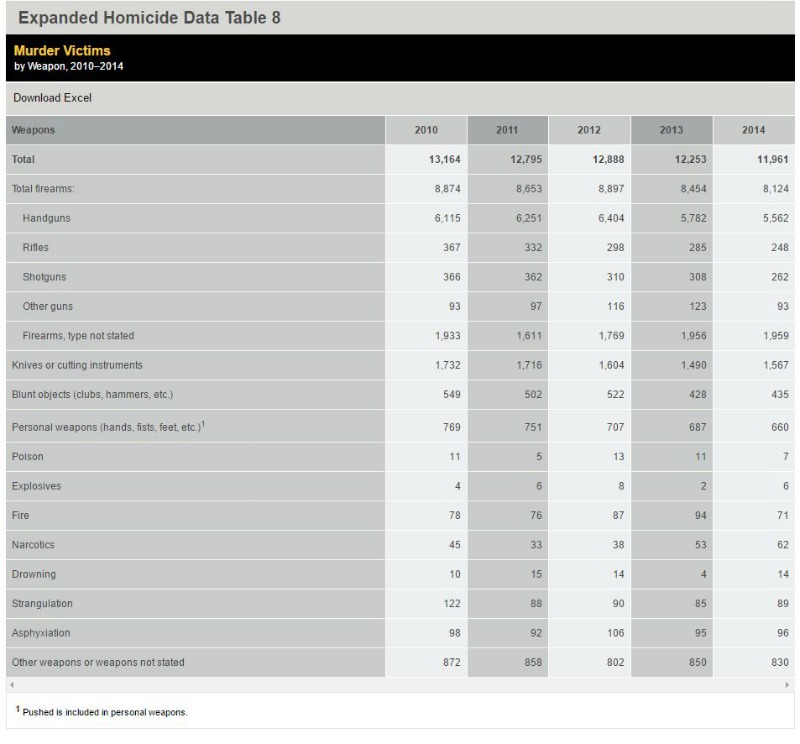 And of the 248 homicides committed in 2014 (the number keeps DROPPING), the FBI doesn’t designate the TYPE of rifle used so there could be ZERO that were AR-15s.

But facts don’t matter to gun banners like Shaheen.

Gun control is not about safety, it’s about CONTROL.