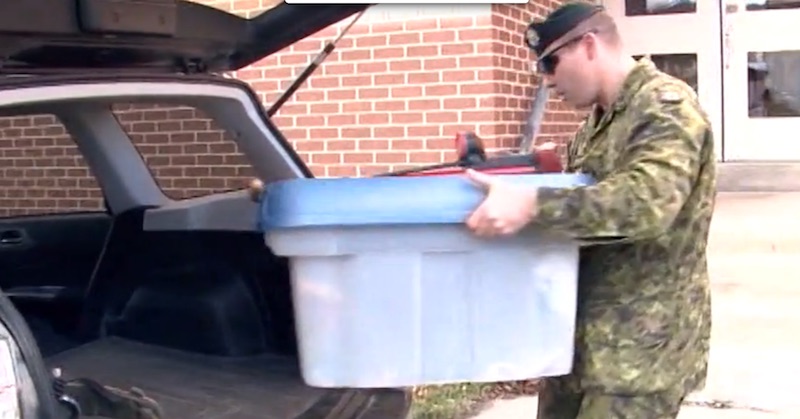 Canada is moving their troops off military bases to make room for refugees.

At Canadian Forces Base Kingston, troops are being told to move out so the government can house thousands of Middle Eastern refugees.

The amazing move displaces soldiers to nearby hotels and motels in Ontario between Toronto and Montreal near the U.S. Border.

At the siteTheRebel, they’re sharing a response to a room inquiry at a nearby hotel.

“I regret to inform you that we are sold out of those dates. Aside from the sporting events, we have taken in our military members long term while they house refugees at CFB Kingston.”

The website obtained documents detailing plans to set up refugee camp-style accommodations at seven Canadian Forces Bases across the provinces of Quebec and Ontario. Clearly, Prime Minister Justin Trudeau didn’t get the memo on how well these refugee camps are doing in Europe. The cost: $33.2 million ($46 million Canadian). The plan will construct taxpayer-funded mosques as well.

In addition, the funding includes hundreds of thousands of dollars for “religious support” including Korans, prayer rugs and other religious items.

We reported last week on the Canadian government’s abrupt pull out from airstrikes against ISIS forces. More than 6,000 refugees will ultimately be housed in various military bases in the country.

Now, CKWS-TV is reporting on soldiers moving out to make way for the refugees – with no word on when they will be able to return.

The TV stationreportssoldiers at Canadian Forces Base Vai Cartier have also been told to ship out to make way for up to 3,000 refugees. CTV Newsreports:

In the past, military bases have been used to house newcomers to Canada. In 1999, 5,000 refugees from Kosovo were divided between two military bases: CFB Greenwood in Nova Scotia and CFB Trenton in Ontario. Hundreds more refugees were also housed at CFB Kingston, CFB Borden, CFB Aldershot (in Nova Scotia) and CFB Gagetown (in New Brunswick)

Despite short notice, the plan was executed successfully, according to retired Brig.-Gen. Gaston Cloutier, who was on the Trenton base at the time.

“It was hard work, but it was done properly,” he told CTV’s Power Play last month.