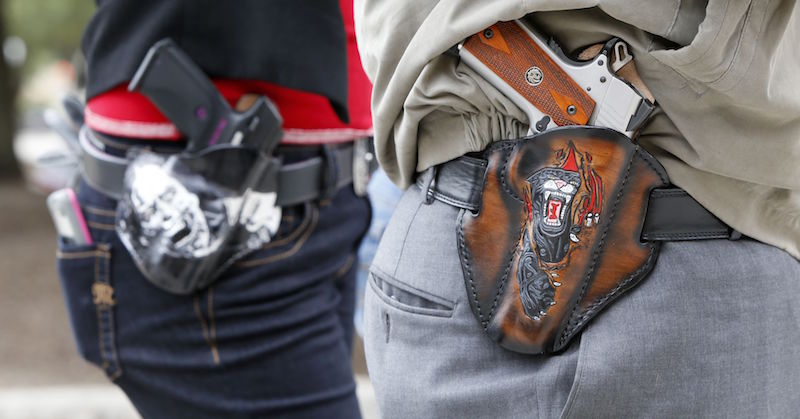 It’s been 40 days since Texas’ open-carry law went into effect and the big news out of the Lone Star State is … meh.

Despite hand-wringing from liberals, law enforcement and gun-banners who claimed the New Year would come with rampant crime, frantic 911 calls and bodies littering the streets of Dallas, police are now saying it was “much ado about nothing,” Fox News is reporting.

“We do not have anything interesting to report,” Cpl. Tracey Knight of the Fort Worth Police Department said to a local newspaper, the Star-Telegram. “Two calls so far, no issues. We have no concerns and we have had no problems.”

Over at the Tarrant County Sheriff’s Department they’ve had zero calls.

Of course, liberals are holding out hope that gun battles break out in the streets.

“It’s too soon to tell,” say opponents such as Carolyn Daniel, an Arlington volunteer with the Texas chapter of Moms Demand Action for Gun Sense in America.

She and others with Moms Demand Action opposed the law before it took effect and remain opposed. “Changes in legislation can take years to determine an impact,” she said.

Well, they were all wrong.

Other counties in the Lone Star State have reported few, if any, complaints related to the law in the first month of 2016.

In Bastrop County, despite anticipation that there would be a flood of 911 calls, none were logged the first weekend that the law went into effect.

Contrary to widespread perception, Texas’ gun laws have long been among the strictest in the nation. Carrying handguns was first restricted by local legislature in 1871. In 1995, the law was changed to allow for concealed carry permits. The new, open-carry law was passed last year.

Some businesses implemented their own ban – as they are legally allowed to do – like Starbucks, Jack in the Box and Chipotle. Others have no issue with “open carry,” like The Home Depo and Bass Pro Shops.

Texas police were largely against the measure. A survey found that three-quarters of police chiefs in the state were opposed to the law.

The Michael Bloomberg-backed “Moms Demand Action” made stopping Texas Open Carry a priority, with story after story on their website condemning lawmakers. They created a list of businesses that plan to ban open carry in their stores and restaurants and posted signs that business owners can use to keep gun-toting Texans out.

The group insisted that “more guns” would mean “more crime.” Of course, that hasn’t panned out, but they’re still holding out hope. Maybe they’ll get that mass shooting they’re so desperate for so they can continue their fight against the Second Amendment.