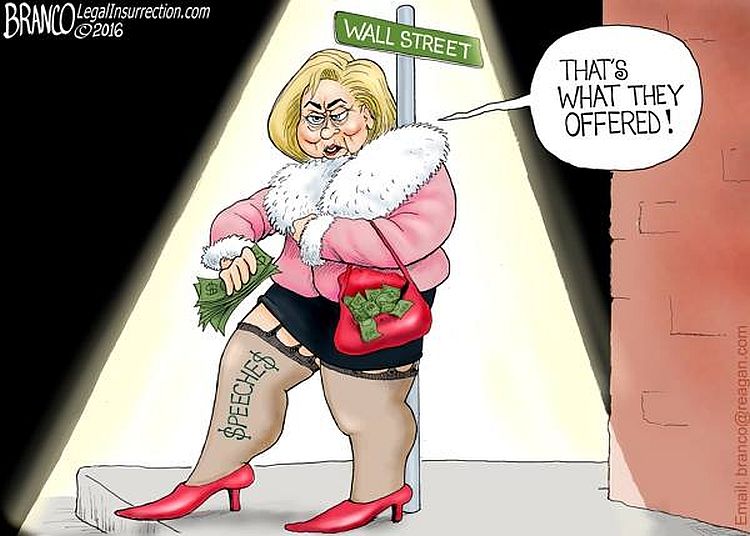 Hoping it will blow over, Hillary Clinton is continuing to dodge questions about what exactly she said to fat-cat bankers during those $225,000 speeches.

When asked directly if she’ll release the transcripts of the secret speeches she gave, she tells us maybe. Her campaign says they’re “looking into it.”

During one interview, Clinton’s press secretary said they’re looking to see “if transcripts are available,” which is idiotic. Nobody pays hundreds of thousands of dollars for someone to speak and doesn’t keep track of what they said.

So what exactly did she say? Do you care? Clinton’s campaign said you don’t care. “I don’t think voters are interested in the transcripts of her speeches,” Clinton’s pollster Joel Benenson said. Oh yeah?

Clinton spoke three times to Goldman Sachs. Once in June 2013 and twice in October of that year. According to people who attended, they were question-and-answer sessions where she offered “a tour of the world,” with her observations on the situation in China, Iran, Egypt and Russia.

She also discussed the dysfunction in Washington, the government shutdown of that year and Obamacare, attendees said. But we don’t really know. Clinton insisted the speeches be closed to the public. No reporters, no outside folks.

What else did she talk about? Did she make promises to them? Did she give advice on how to keep making wheelbarrows of cash?

Bernie Sanders has suggested that making $600,000 in one year, from just three speeches means Hillary’s been corrupted. That if they’re giving her this much money, she’s in the pocket of Wall Street. After all, they know her – she was their U.S. Senator.

This could be a red herring – maybe the Clinton Camp is hoping people focus on the speeches rather than everything else that’s dodging her campaign. Maybe she said nothing improper and when they release the transcripts – and the story falls flat – that all the oxygen will be sucked out of the Sanders campaign.

But then again, maybe Hillary said something that she really doesn’t want the American people to know about.

And then all bets are off.
H/T: weaselzippers.us