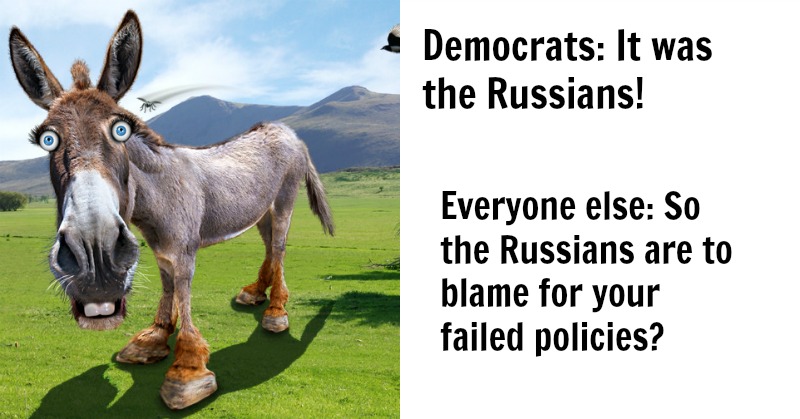 Leftists and establishment Republicans have decided to run with the fake news narrative that the Russians hacked the elections and handed the win to President-elect Donald Trump. Breitbart compiled a list of ten reasons why this story is precisely the type of fake news that the left has laughably blamed conservative new media for, to avoid having to take ownership for their stunning 2016 losses.

#1. The Russian hacking accusation comes with no new information.

The C.I.A.’s conclusion does not appear to be the product of specific new intelligence obtained since the election, several American officials, including some who had read the agency’s briefing, said on Sunday. Rather, it was an analysis of what many believe is overwhelming circumstantial evidence — evidence that others feel does not support firm judgments — that the Russians put a thumb on the scale for Mr. Trump, and got their desired outcome.

#2. The evidence that has been gathered by the CIA is “inconclusive.”

“While lawmakers were seemingly united on the need to present a strong bipartisan response, the FBI and CIA gave lawmakers differing accounts on Russia’s motives, according to The Post,” The Hill reported Sunday.

#3. Despite the fake news outcry, the CIA has made no public claims.

CIA veterans themselves have urged caution in regard to the claims of Russian interference. Nada Bakos, a top former CIA counterterrorism officer, told Newsweek about the need for caution in a comment that Breitbart noted was fairly typical of those seen from CIA veterans.

“I am not saying that I don’t think Russia did this,” Bakos said. “My main concern is that we will rush to judgment. The analysis needs to be cohesive and done the right way.”

#4. The reports don’t allege that voting was tampered with.

If you just listened to leftists, the impression you would probably be left with is that our voting systems were compromised — an assertion not supported by the reports which go only as far as to say that the Democrat National Committee’s and Hillary Clinton campaign chairman John Podesta’s emails may have been hacked with the help of the Russians.

There’s no evidence at this point that the elections were tampered with by the Russians — just ask Jill Stein.

#5. This isn’t the first time the Obama administration tampered with intelligence for political gain.

The CENTCOM scandal revealed that “senior U.S. Central Command (CENTCOM) leaders manipulated intelligence assessments in 2014 and 2015 to make it appear that President Barack Obama is winning the war against the Islamic State (ISIS/ISIL).”

Assange said of the DNC emails: “That is the circumstantial evidence that some Russian, or someone who wanted to make them look like a Russian, was involved, with these other media organisations. That is not the case for the material that we released.” WikiLeaks  hit back against the claims in regard to the Podesta emails as well.

Even if they were successful, it doesn’t mean that they swayed the election. Pollster Frank Luntz tweeted: “Did Russia also hack Hillary’s campaign calendar and delete all her stops in rural Wisconsin, Penn., and Michigan?”

#8. Obama himself has worked to interfere in foreign elections.

It’s laughable for Obama and the left to get all worked up about foreign interference in elections when they themselves have done just that. In 2015, the Obama administration worked to sway the Israeli election in favor of Prime Minister Benjamin Netanyahu’s opponent. The State Department handed $300,000 to a “pro-peace” Israeli group which then went to political activists who worked to defeat Netanyahu.

Oh, and then there was Obama’s two cents about Brexit — also known as an attempt to interfere with Britain’s affairs.

#9. What would we get from allowing Russian interference in our election?

Would we yield primacy in Eastern Europe to Vladimir Putin? Would we give up our plans for missile defense? Would we make deep unilateral cuts in our nuclear arsenal in exchange for flimsy concessions? Would we tolerate a Russian land invasion of a friendly, pro-Western country? Would we cede the Middle East to Russian hegemony? Because Hillary Clinton and Obama already did that.

What is the simplest explanation here? The left is using the “fake news” known as the Russian hacking story to cast doubt and explain away their massive failure.

The left has provided no evidence that the Russians swayed the election but they have slandered their opponents as “fake news,” as the MSM continues to spread the fake news they have become infamous for.