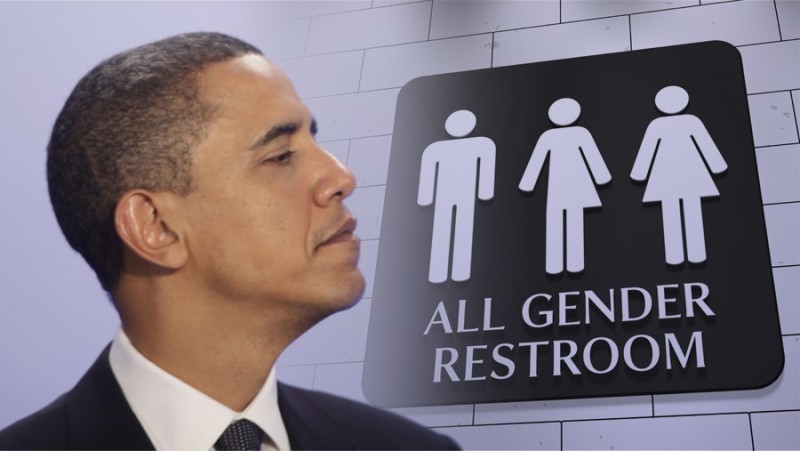 Almost a dozen states have gathered together to sue Obama over his demands that every public school in the nation allow transgender kids to use what ever bathroom or locker room they feel like using on any given day.

Earlier this month the Obama administration issued a directive insisting that every school implement a transgender-friendly bathroom and locker room policy under the assumption that federal title IX funding rules gives the administration the authority for such a wide ranging decree.

Now eleven states Attorney Generals and departments of education have banded together to put a halt to Obama’s decree.

Led by Texas, the states say Obama’s demands have “no basis in law” and the policy is of a nature that would require an act of Congress or the states to implement not a royal decree by a president.

“Defendants have conspired to turn workplace and educational settings across the country into laboratories for a massive social experiment, flouting the democratic process, and running roughshod over commonsense policies protecting children and basic privacy rights,” the lawsuit says.

“Our local schools are now in the crosshairs of the Obama administration, which maintains it will punish those schools who do not comply with its orders. These schools are facing the potential loss of school funding for simply following common sense policies that protect their students,” Texas Attorney General Ken Paxton said in a statement.

Obama quickly acted on his desire to force every school in the nation to push the pro-LGBT agenda after a court in Virginia ruled that a school had to allow a girl claiming to be a transgender boy to use the boy’s restrooms and locker rooms at the school.

But Obama’s insistence that Title IX anti-discrimination rules should allow him to mandate his policy on all schools everywhere is an unproven assumption that is not based in law.

Indeed, Brad Dacus, president of the Pacific Justice Institute,told Breitbart Newsthere is no precedent in law to be used to validate Obama’s claims.

“There is absolutely nothing in the way of case law or statutory language that would legitimize such a mandate upon public schools,” Dacus said.

Dacus also felt such a move would represent, “a major setback for local control by school districts, as well as a major breach of trust for parents throughout the country who value the privacy protection of their sons and daughters in the locker rooms and showers at public schools.”