Are you into conspiracy theories, or interesting and eerily prophetic historical writings? Well, this will tickle your fancy.

A set of books from the 1890s that Reddit users discovered is raising eyebrows. The author of the books is Ingersoll Lockwood, an American political writer, lawyer and novelist, according to Newsweek. The two books, published in 1893 and 1896, contain a subject matter that may as well have been taken straight from 2017 news headlines and meme-ology.

The first book is titled “Baron Trump’s Marvelous Underground Journey.” The book details the journey of an aristocratically wealthy young boy, who traveled to Russia on a rather extraordinary journey; young Baron can even time travel.

One Twitter user snapped a photo of the front part of the book:

So the internet is going crazy about this book with Baron Trump in the title from 1893, with it's sequel "The Last President". pic.twitter.com/Cpxfy9CnB0

Here is a snapshot of one of the book’s illustrations: 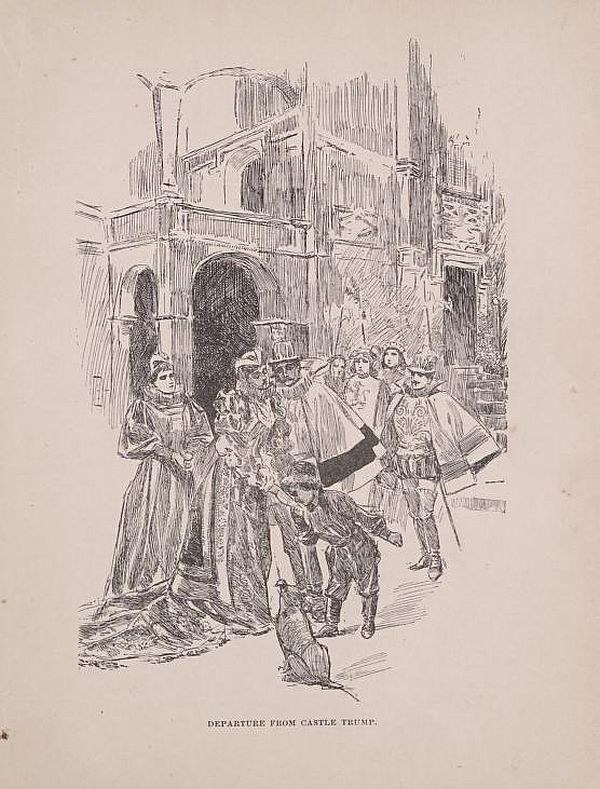 Before leaving for his voyage through the unknown, Trump is told of his family’s motto: “The pathway to glory is strewn with pitfalls and dangers.”

Illustrations from the novels depict Trump dressed in lavish, old-fashioned clothing and jewelry as he departs from Castle Trump and begins his voyage, heading to Russia to locate an entrance into alternate dimensions.

Ironically, the narrator, the “master of all masters,” of the book is named… Don.

Are you creeped out yet? Just wait, it only gets better.

What is happening in this book? A new President was just elected, one who ran as an outsider with an enormous opposition. Right before the election results were announced, all seemed well with a certain crowd, a crowd who were rather sure of which candidate would win the election (sound familiar?).

The people were gathered, light-hearted and con-
fident, at the evening meal, when the news burst
upon them. It was like a thunder bolt out of an
azure sky : “ Altgeld holds Illinois hard and fast in

the Democratic line. This elects Bryan President of
the United States !”

(It is quite possible that he was referring to William Jennings Bryan, who ran his first Presidential campaign in 1896; this is only speculation on my part, though).

In New York City, when the results were announced, swaths of the city were placed on lockdown due to masses of violent protesters storming the area.

Strange to say, the people in the upper portion of
the city made no movement to rush out of their
houses and collect in the public squares, although the
night was clear and beautiful. They sat as if paral-
yzed with a nameless dread, and when they con-
versed it was with bated breath and throbbing
hearts.

In less than half an hour, mounted policemen
dashed through the streets calling out : “ Keep

within your houses ; close your doors and barricade
them. The entire East side is in a state of uproar.
Mobs of vast size are organizing under the lead of
Anarchists and Socialists, and threaten to plunder
and despoil the houses of the rich who have wronged
and oppressed them for so many years. Keep within
doors. Extinguish all lights.”

And their rallying cry?

That kind of sentiment certainly sounds rather familiar, does it not?

Another strange reference is the “Fifth Avenue Hotel.” As Newsweek notes, the address in the original book is now where Trump Tower stands on Fifth Avenue in Manhattan.

The Fifth Avenue Hotel will be the first to feel
the fury of the mob. Would the troops be in time to
save it?

Buried deep in the novel is yet another eerie detail: this newly elected President has a cabinet member whose last name is Pence. Lafe Pence is the Secretary of Agriculture in the story.

Talk about freaky, some of these descriptions sound more like stories that we have reported over the past year rather than historical fiction!

For all the focus on ‘Baron Trump’ and the ruckus over a new President, there is also another detail that this story contains that is bound to give you goosebumps.

In “The Last President,” Lockwood begins the first chapter of the book with the following paragraph:

That was a terrible night for the great City of
New York — the night of Tuesday, Noverjber 3rd,
1896. The city staggered under the blow like a huge
ocean liner which plunges, full speed, with terrific
crash into a mighty iceberg, and recoils shattered
and trembling like an aspen.

Does that not sound like the 1912 sinking of the Titanic?