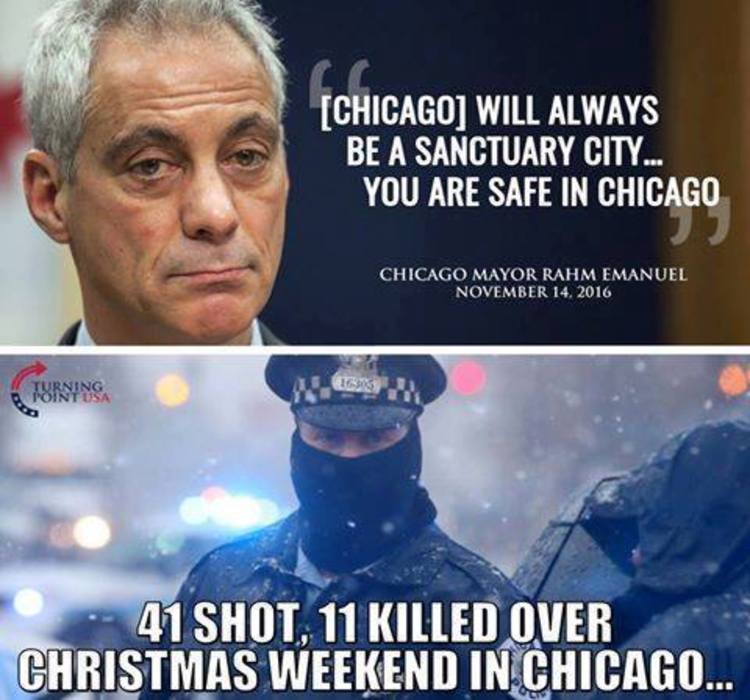 C.E. Dyer reports that the violence in Chicago raged on over the Christmas weekend as 30 people were shot resulting in 11 fatalities which added to the massive amount of homicides this year — up significantly from just last year.

The New York Times reports that at least 27 people were shot, at seven of them fatally, during a 48-hour period over Christmas weekend. The seven fatal shootings brought the total number of homicides in Chicago so far this year to 745, a 56 percent increase from the number at the same time last year. According to the Chicago Tribune, this year is the first in nearly two decades that more than 700 homicides have been recorded in the city.

Blacks made up around 78 percent of the homicide victims; Hispanics around 17 percent.

As Powerline noted, Chicago has long had liberal Democrats at the helm in the city that has been wracked by gun violence despite the tough gun laws that the left seems to think fix everything; even when they have the evidence right in front of them to see that isn’t the case.

Powerline also added that in regard to the tough gun laws, the strict gun laws are often not backed up by tough criminal sentencing.

And people actually wonder why Americans responded to strongly to President-elect Donald Trump’s promise to restore law and order in this country?

The left’s policies were roundly repudiated this election and now Trump and the Republicans have a huge opportunity to turn things around.

It won’t be easy and it won’t happen overnight, but they have a huge window of opportunity here.

Perhaps that’s because her and her husband’s version of hope is apparently very different from the millions ofAmericans who see what has happened these last eight years and are desperate for real “hope and change?”