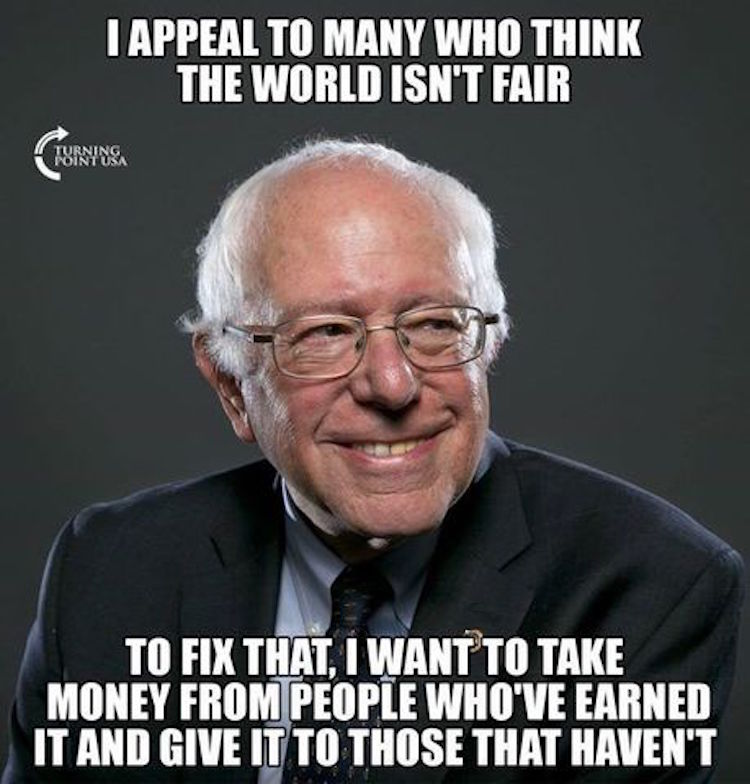 The most remarkable thing about socialist politicians is how little effort they put in to hiding the fact that they don’t live under the economic constraints they advocate imposing on the rest of the country.

Exhibit A: Vermont Senator and failed 2016 presidential candidate Bernie Sanders. The Daily Wire reports that over the weekend, America’s most well-known socialist (well, at least the most well-known one who openly accepts the label) swore in his fellow leftist Bill de Blasio to the latter’s second term as Mayor of New York City.

However, there was one particular detail that stood out, as seen in the photo accompanying the below tweet:

Mayor Bill de Blasio was sworn in for a second and final term, offering a progressive vision. The ceremony was led by Senator Bernie Sanders. https://t.co/dURm3ZP42w

The septuagenarian Senator wore a $690 Burton 2L LZ down jacket pulled up around his ears as he administered de Blasio’s oath of office in the subzero weather, even though de Blasio and his family were dressed (also to the nines) in tailored wool and faux fur.

It’s not the first time Bernie’s worn this jacket; true to form, he bundled up in the Burton coat for Donald Trump’s inauguration last year, though the temps in Washington, D.C., at the time were just fine for a more acceptably professional look.

If you’d like to copy Bernie’s faux-progressive look, though, you may have to shell out a little more than the Vermont Senator. Burton is only carrying one version of the coat right now, and it’s $899.

This is neither the first nor the most dramatic instance of the Bern exhibiting personal extravagance that most of the folks in his class-warfare fan base could only dream about; remember back in August 2016, when TFPP reported on Sanders purchasing a $600,000 beachfront house in Vermont to use as a summer home? (Oh, and if you’re keeping track, that wasn’t Sanders’ second house; it was his third).

Of course, there’s nothing in the world wrong with spending large sums of money on fine things. But it is a bit jarring coming from a candidate who’s intentionally cultivated an image of common-man thriftiness through stuff like “fl[ying] coach straight into supporters’ hearts” (except when he doesn’t).

More importantly, it’s downright hypocritical coming from a candidate who routinely shames the United States for allegedly “worship[ping] wealth rather than caring for the poor,” and whose entire theory of economics and public policy boils down to confiscating wealthy people’s wealth because they don’t “need” all the things they spend it on. No, really:

You can’t just continue growth for the sake of growth in a world in which we are struggling with climate change and all kinds of environmental problems. All right? You don’t necessarily need a choice of 23 underarm spray deodorants or of 18 different pairs of sneakers when children are hungry in this country. I don’t think the media appreciates the kind of stress that ordinary Americans are working on.

How many yachts do billionaires need? How many cars do they need? Give us a break. You can't have it all.

Why does Bernie Sanders “necessarily need” three houses? Aren’t hotels (or staying with friends) good enough for vacations? What was wrong with the selection of winter coats at his local Kohl’s or JC Penny’s? Doesn’t he realize how many people could have really used that money? Shouldn’t he be leading by example?

Gee, it’s almost as if socialism is a sham or something…