The socialist, gun controlled, paradise that is Chicago, Illinois just saw its worst weekend of gun related violence so far this year with fifty people shot and 10 killed.

So much for gun control!

When will liberals learn that gun control does nothing but embolden the bad guys who know their victims will most likely be unarmed and unable to defend themselves?

Here’s more on the weekend violence in Chicago from ABC News:

At least 10 people were killed and 52 others were wounded in a tragic outburst of Chicago gun violence over the weekend, according to police.

Officers with the Chicago Police Department attributed the shootings to rash of gang-related incidents. Many of the shootings occurred between 6 p.m. and early Saturday morning, police said.

A 28-year-old man and 26-year-old man said they were standing outside a red van at around 2 a.m. when they heard gunshots and realized they’d been shot, WLS reported. Two other men, ages 28 and 25, were shot in the head around the same area early Saturday, WLS said. 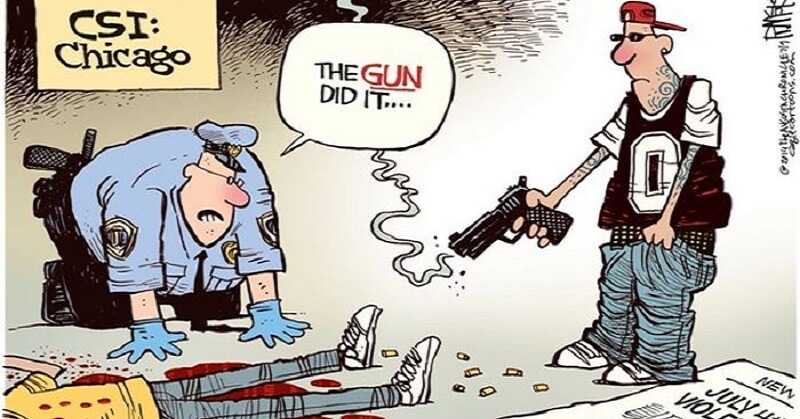 This is terrible and shows that everything liberals touch turns into a disaster of epic proportions.

Can you imagine the outcry in the liberal media if this happened under a Republicans watch as mayor of Chicago?

That sent a message to thugs

Chicago police say 52 people were shot, 10 of them fatally, in gun violence over the weekend – AP

Steve Straub
Steve has been involved in national politics for over 20 years and helps run one of the largest conservative opinion and analysis sites in the country.
Democrat Hypocrisy on Covid Restrictions Brutally Summed Up by a Single Cartoon
Moderna Top Doc Seemingly Sides With Rights Stealing Dems, Says Vaccine Might Not Stop Spread, No Changing of Behavior After
FBN’s Kennedy Lays it Out: Snitching on Neighbors for Gathering on Thanksgiving Is Like Living in Nazi Germany
MSNBC Host Reid Asks If Republicans Who Still Defend Trump’s Voter Fraud Claims Be Allowed to Polite Society
Brutal Cartoon Shows What's Next if Democrats Finally Get Their Way, The End of Freedom of Speech and Religion
See more...