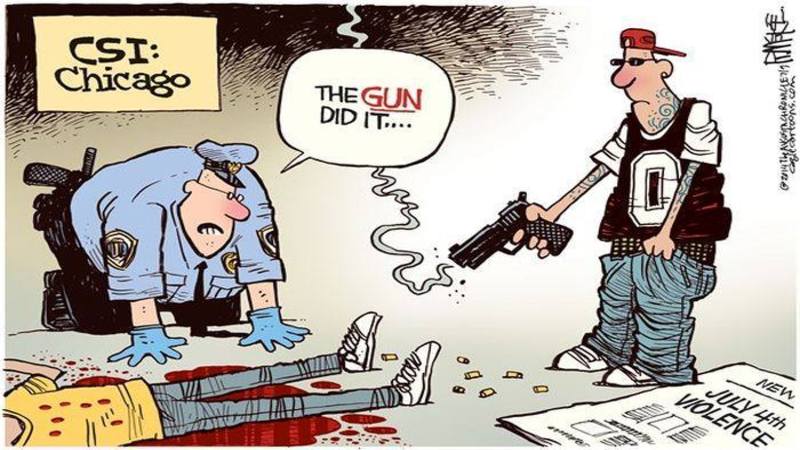 The city that is #1 in gun control is ironically also #1 in murder and gang violence.

The Labor Day weekend tragically ended in bloodshed in the Windy City. 9 people were left dead and a whopping 46 people were wounded.

The fatal shootings over the weekend included:

• Earlier, Derrick Simpson, 56, was stabbed to death Monday morning near his home in the 800 block of East 81st Street after an altercation turned physical, police said. Simpson was stabbed in the chest about 11:35 a.m. during the fight, police said. He was taken to Advocate Christ Medical Center in Oak Lawn and pronounced dead there at 12:16 p.m., authorities said.

• On Sunday, 20-year-old Reba Wagner was shot at about 7:45 a.m. in the 7200 block of South Green Street in the Englewood neighborhood, authorities said. She suffered multiple gunshot wounds and was pronounced dead on the scene, according to the Cook County medical examiner’s office.

• Lavell Southern, a 23-year-old from Calumet Heights, was shot at about 2:30 a.m. Sunday near Randolph Street and Racine Avenue on the Near West Side, authorities said.

Southern played football at Mount Carmel High School on the South Side and played defensive back for Carthage College in Kenosha. A knee injury ended his college football career, according to an aunt, Beverly Green. He was working a summer job downtown and planning on heading back to school to finish his degree, Green said.

“He’s been home about three years,” Green said. “To know him was to love him. He had no enemies.” Southern was sustained multiple gunshot wounds and was pronounced dead at Stroger Hospital. Another 23-year-old with him was shot in the shoulder, police said.

• Twenty-year-old Shaquandra Ratliff, who family said has a 2-year-old son, was shot at about 1:30 a.m. Sunday in the 6100 block of South Cottage Grove Avenue in the Woodlawn neighborhood on the South Side.

A fight erupted during an outdoor party commemorating the one-year anniversary of the death of a gang member, police said. Ratliff, who police said had no gang affiliation, was in an alley and was struck in the head. She was taken to Northwestern Memorial Hospital and pronounced dead there.

Family remembered her Monday as an outgoing and trusting woman who was hanging out with the wrong crowd.

“She was my best friend,” said her 17-year-old sister, Shakia Herron. “I feel like I lost a part of me. I’m very angry. I want to know who took my big sister away from me.”

Ratliff’s mother and sister were not pleased with the crowd she was hanging out with at the time of her shooting.

“She loved them, but they didn’t love her back,” said her mother, Claudia Ratliff.

“She was with people that were supposed to be her friends,” her sister said, adding that “all of them knew everything that happened and somebody saw something,” but no one was telling police.

The scene turned hectic after Ratliff’s shooting early Sunday. At one point, about 20 mostly young men moved north on Cottage Grove while fighting as police tried to disperse the group.

• Leonard J. Williams-Tate, a 31-year-old North Austin resident, was shot about 11:20 p.m. Friday in the 1600 block of North Mayfield Avenue, police said. He was taken to Mount Sinai Hospital after getting shot in the side and was later pronounced dead, according to authorities.

• Also in Lawndale Friday night, a 35-year-old man was shot in the abdomen about 8:20 p.m. in the 1100 block of South Richmond Street, police said. Someone drove him to Mount Sinai, where he was later pronounced dead, authorities said. The man’s identity is being withheld pending next of kin notification.