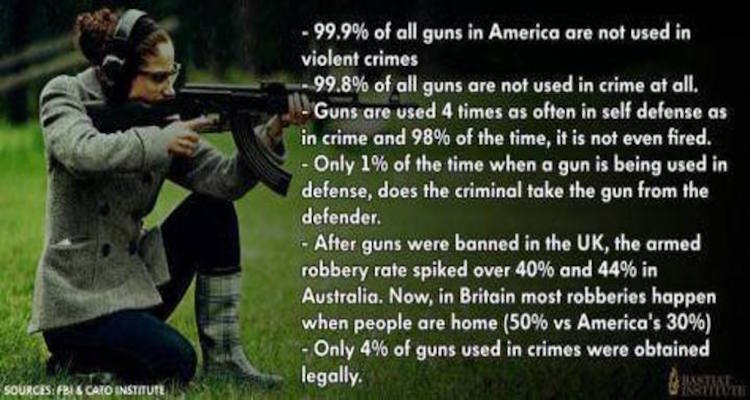 Texas Attorney General Ken Paxton issued a clarifying opinion on Texas law on Wednesday, stating that churches can chose whether or not to post a notice prohibiting guns, and that handguns are allowed if such a notice isn’t posted.

In effect, the Legislature provided churches the same option as most other private entities to decide whether to allow the carrying of handguns onto the premises of church-owned property. If a church decides to exclude the concealed or open carrying of handguns on the premises of church property, it may provide the requisite notice, thereby making it an offense for a license holder to carry a handgun on those premises.

As we saw in Sutherland Springs, Texas, deranged individuals can view churches as easy prey. Shooters can and will chose locations where guns are not permitted for law-abiding people because the criminals know that their victims will be helpless.

Posted signs obviously stop nobody intending to do harm. They only stop license holders from entering the premises with the handgun they carry for defense.

Paxton’s clarification on Texas law gives hope to those who exercise their Second Amendment rights. From the Texas Attorney General website:

Lieutenant Governor Dan Patrick requested the opinion on December 1, and asked Attorney General Paxton to expedite his responses “so that churches may know what legal options they have to improve security” in the aftermath of the Sutherland Springs tragedy.

Patrick responded to Paxton by praising his interpretation of the law.

One Texas pastor told the American-Statesman that his church protects its congregation by having ushers keep an eye out for trouble:

“I believed our state laws provided more protections than many realized and I requested the opinion to make sure that Texans are clear about our laws, especially when it comes to church security,” [Patrick] said in a statement.

Some churches across the state already allow their congregants to carry handguns onto the premises, said Kyle Childress, pastor of Austin Heights Baptist Church in Nacogdoches. Over the past year or so, Childress has published several pieces in Christian magazines about the issue, including one about his congregation’s recent decision to prohibit guns in the church.

“There is a fundamental question about who is the church and what are we about. Are we going to be gun-carrying and put trust in redemptive violence?” Childress told the American-Statesman. “I don’t believe the way of Jesus Christ teaches that.”

Instead of guns, Childress’ church has tried to improve security by having more ushers greet people outside of the church and keeping more eyes on entrances. But even those strategies have limitations, he said.

“If somebody wants to get in, they’re going to get in. So, we, like other congregations, are exploring what are ways we can be more aware of safety without compromising our lordship of Christ,” he said.

But unless his ushers happen to be bulletproof, they’re just as defenseless as the people they supposedly protect.

Church leaders should at least give worshipers a chance to decide for themselves if protecting their families constitutes “violence.”

Is it problematic for Christianity, as Childress suggests, to allow for self defense with a weapon on church property?