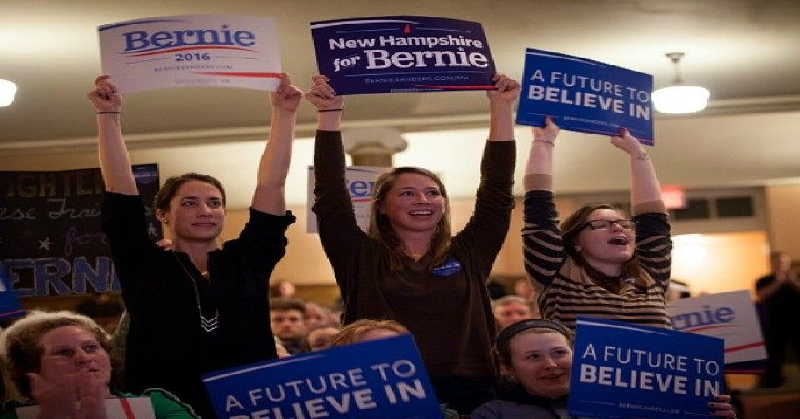 this election cycle, its a sad reminder of just how far-left this generation has become. 43% of today’s millennials have a favorable view of socialism – making it more favored than capitalism.

So what’s gone wrong with this generation? Over at The Federalist, Emily Ekins and Joy Pullmann have put together a fantastic list of reasons on why this generation is so enamored with the idea of socialism.

1. Millennials Don’t Know What Socialism Is

The definition of socialism is government ownership of the means of production—in other words, true socialism requires that government run the businesses.

In fact, those most concerned about socialism are those best able to explain it.

The margin of support for capitalism over socialism is only +10 points, but the margin for a government-managed economy over a free-market system is +32 points.

Why might millennials have less negative visceral reaction to socialism? Partly because the Cold War has ended.

It was clear that Soviet socialism was at odds with the American-style free enterprise system. The USSR had a completely centrally planned economy with shortages, rationing, long lines, less innovation, less variety, lower-quality goods and services, and a lower standard of living as the consequence. Thus, free-market economists probably had an easier time convincing Americans that American capitalism was far preferable to Soviet socialism.

Perhaps the most important reason millennials are less concerned about socialism is that they associate socialism with Scandinavia, not the Soviet Union. Modern “socialism” today appears to be a gentler, kinder version. For instance, countries like Denmark, Sweden, and Norway offer a far more generous social safety net with much higher taxes.

These countries actually are not socialist, but “socialistic.” To accommodate their massive social welfare spending, these countries opened their economies to free-market forces in the 1990s, sold off state-owned companies, eased restrictions on business start-ups, reduced barriers to trade and business regulation, and introduced more competition into health care and public services.

In fact, today these countries outrank the United States on business freedom, investment freedom, and property rights, according to the Heritage Economic Freedom Index. So, if anything, the lesson from Scandinavian countries is that market reforms, not socialist ones, explain their prosperity.

Unlike the USSR, this modern version of this quasi-socialism has also learned to defer its costs, effectively consuming the future to make things materially more comfortable for those in the present. Like the United States, European welfare states have racked up huge debts and unfunded liabilities. However, their populaces don’t feel that immediately, because citizens haven’t yet had to pay all the taxes that must come with it.

The consequences of slower economic growth, lower productivity, and relatively lower standards of living are opaque unless you have something to compare it to

Unfortunately, American schools teach very little about basic economic concepts such as the idea of tradeoffs or the drivers of economic growth and effects of growth and stagnation on ordinary people. Young people—along with more than enough of their elders—too often naively believe canards such as that “taxing the rich” can solve our country’s economic ills.

7. Every Kid Gets a Trophy

The fact that millennials disproportionately think that all kids deserve a trophy regardless of achievement probably at least partly explains their disproportionate support for Sanders. While millennials could forever be a “everybody gets a trophy” generation, as young people take on more responsibilities—buy a house, get married, have kids, get a promotion, start paying noticeable taxes, and work long hours—they may start to think their hard work and sacrifices should be rewarded more.

8. The Lesson of the Twentieth Century

Previous generations debated and history ultimately revealed that free market capitalism does more good for people than Soviet socialism. However, the Scandinavian model raises a new question for our generation: is this form of Democratic soft socialism sustainable? Will this iteration of socialistic dabbling work despite socialism’s many historical failures?

This is a major question of our time, and although young people are famous for believing this about things like drinking and driving or unplanned pregnancy, it’s likewise highly unlikely regarding socialism that “this time, things will be different.”

The generational divide is real, and while millennials are correct about many things, this is one area in which they should listen to their elders.