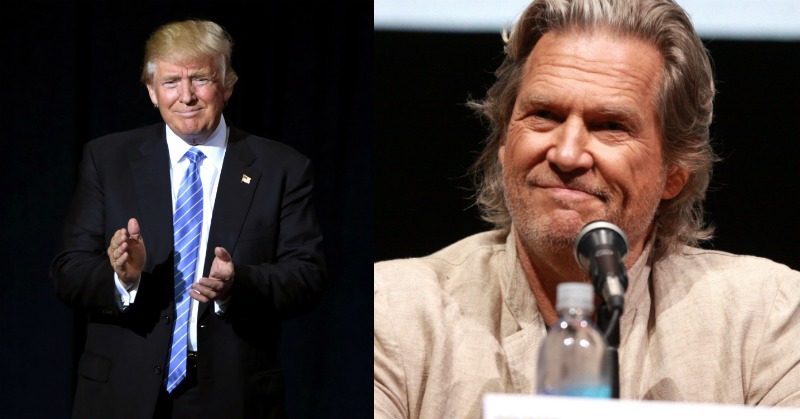 Actor Jeff Bridges offered a very interesting bit of commentary that served as a huge break from Hollywood orthodoxy on President Donald Trump and the leftist reaction to him.  Taking a line from his iconic move role, Bridges reportedly said: “As The Dude might say,” he continued, “this aggression will not stand.”

“That’s what I think is needed today, to kind of put a check on ourselves and knowing what’s right or wrong and being so sure that [President] Trump is an asshole and that he’s going to be terrible and all this,” Bridges, star of the “Big Lebowski” and currently an Oscar nominee for the 2016 film “Hell or High Water,” told CNN Money in an interview published Thursday.

“You can have very strong opinions, but to go after this peace and this beauty that we’re after I think we gotta show up and give a little space for something beautiful to bloom out of it.”

Bridges, 67, had said in an interview shortly after Trump’s stunning election victory, “I’m rooting for the guy, but we’ll see how it all goes.”

Seriously though, I give Bridges credit for breaking with Hollywood and calling for peace — although the hippy dippy part equating Trump’s “finger pointing” (far more often than not warranted) with the riotous, violent leftists’ behavior is a skosh annoying in my book …

The left’s insane behavior has divided the country. As Bridges essentially pointed out, you don’t have to like Trump, but he’s president so why not give him a chance?

That would be the reasonable thing to do, but as we all know, leftists are not reasonable.

Trump threatens the radical ideology of the left in a way that has never been seen before, and they are really reacting quite predictably. They have been backed into a corner and are lashing out in response.

It is disturbing, dangerous, and shameful, but it is certainly not surprising.

While I highly doubt any leftists will heed Bridges’ advice, it’s a welcome change from the garbage flowing out of the mouths of many other Hollywood elites and as we all know, change has to start somewhere.