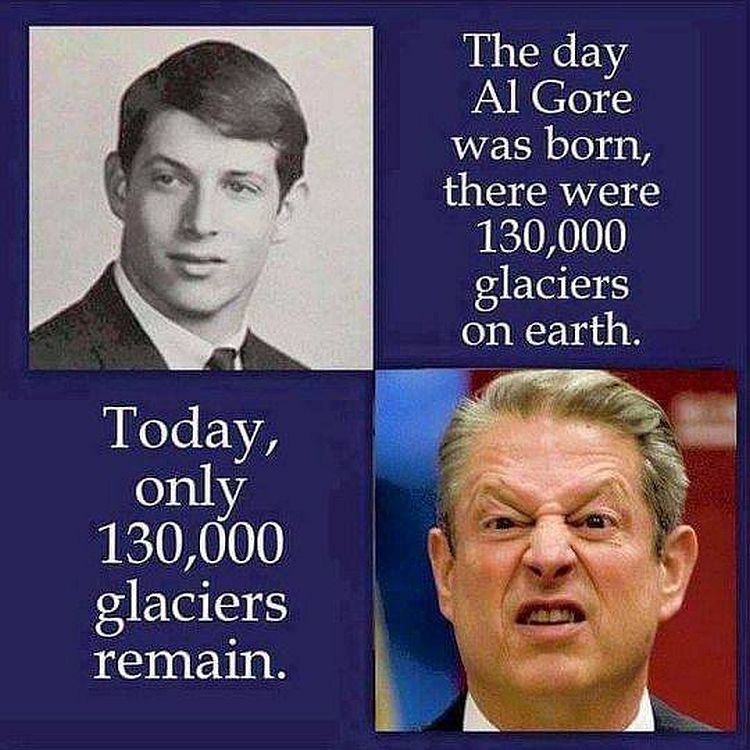 Russ Hepler asks if you remember when Al Gore predicted the global ice caps would all be melted by 2014. Well, it may be an “inconvenient truth” for Al to accept the fact that 2014 has come and gone and, yes, we do still have ice caps at earth’s poles.

In reality, what we are now seeing completely contradicts the whole “Climate Change/Global Warming” hoax President Obama is peddling at the Paris climate summit right now.

NASA.gov  is actually reporting data from Antarctica that blows a huge hole in both Gore’s and Obama’s pet scare tactic:

A new NASA study says that an increase in Antarctic snow accumulation that began 10,000 years ago is currently adding enough ice to the continent to outweigh the increased losses from its thinning glaciers.

The research challenges the conclusions of other studies, including the Intergovernmental Panel on Climate Change’s (IPCC) 2013 report, which says that Antarctica is overall losing land ice.

“We’re essentially in agreement with other studies that show an increase in ice discharge in the Antarctic Peninsula and the Thwaites and Pine Island region of West Antarctica,” said Jay Zwally, a glaciologist with NASA Goddard Space Flight Center in Greenbelt, Maryland, and lead author of the study, which was published on Oct. 30 in the Journal of Glaciology. “Our main disagreement is for East Antarctica and the interior of West Antarctica – there, we see an ice gain that exceeds the losses in the other areas.” Zwally added that his team “measured small height changes over large areas, as well as the large changes observed over smaller areas.”

Well, what do you know?  One of Obama’s “science” agencies has come clean about what’s really going on with the planet.

Antarctica isn’t soon to become a tropical paradise after all.  The ice accumulations there are actually growing and have been doing so for a long time.

The study analyzed changes in the surface height of the Antarctic ice sheet measured by radar altimeters on two European Space Agency European Remote Sensing (ERS) satellites, spanning from 1992 to 2001, and by the laser altimeter on NASA’s Ice, Cloud, and land Elevation Satellite (ICESat) from 2003 to 2008.

Zwally said that while other scientists have assumed that the gains in elevation seen in East Antarctica are due to recent increases in snow accumulation, his team used meteorological data beginning in 1979 to show that the snowfall in East Antarctica actually decreased by 11 billion tons per year during both the ERS and ICESat periods. They also used information on snow accumulation for tens of thousands of years, derived by other scientists from ice cores, to conclude that East Antarctica has been thickening for a very long time.

We just reported here that NASA’s sister agency NOAA has refused to use satellite technology to measure earth’s temperatures because those readings would contradict Obama’s “global warming” scam.

Yet, NASA has employed satellite technology to measure the sea ice levels in Antarctica – resulting in this new finding.

Wanna take any bets if this info will make it into any speeches at the Paris summit?

Even if Obama continues to grossly exceed his speaking time limits, it’s a safe bet he will never mention this reality in his rhetoric.

And, please don’t assume Al Gore will be making any public apologies any time soon for his doomsday alarmism.  His ability to lie to gullible people has made him very rich.

Seems like he learned something from serving with the Clintons, doesn’t it?