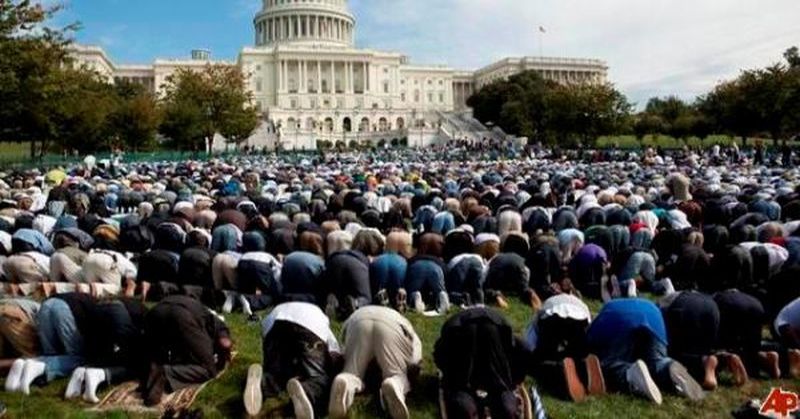 My father-in-law once again has given me a brilliant list of things that President Obama has wrought on this nation.

Before Obama there was virtually no outlandish presence of Islam in America.

All of a sudden, Islam is taught in schools. Christianity and the Bible are banned in schools.

All of a sudden we must allow prayer rugs everywhere and allow for Islamic prayer in schools, airports and businesses.

All of a sudden we must stop serving pork in prisons.

All of a sudden we are inundated with law suits by Muslims who are offended by American culture.

All of a sudden we must allow burkas to be worn everywhere even though you have no idea who or what is covered up under them.

All of a sudden Muslims are suing employers and refusing to do their jobs if they personally deem it conflicts with Sharia Law.

All of a sudden the Attorney General of the United  States vows to prosecute anyone who engages in “anti-Muslim speech”.

All of a sudden, Jihadists who engage in terrorism and openly admit they acted in the name of Islam and ISIS, are emphatically declared they are NOT Islamic by our leaders and/or their  actions are determined NOT to be terrorism, but other nebulous terms like ‘workplace violence.”

All of a sudden, it becomes Policy that Secular Middle East dictators that were benign or friendly to the West, must be replaced by Islamists and the Muslim Brotherhood.

All of a sudden our troops are withdrawn from Iraq and the middle east, giving rise to ISIS.

All of a sudden, America has reduced its nuclear stockpiles to 1950 levels, as Obama’s stated goal of a nuke-free America by the time he leaves office continues uninterrupted.


All of a sudden, a deal with Iran must be made at any cost, with a pathway to nuclear weapons and HUNDREDS of BILLIONS of dollars handed over to fund their programs.

All of a sudden America APOLOGIZES to Muslim states and sponsors of terror worldwide for acts of aggression, war and sabotage THEY perpetrate against our soldiers.

All of a sudden, the American Navy is diminished to 1917 Pre-World War I levels of only 300 ships. The Army is at pre-1940 levels. The Air Force scraps 500 planes and was planning to retire the use of the A-10 Thunderbolt close air support fighter. A further draw down of another 40,000 military personnel is in progress.

All of a sudden half of our aircraft carriers are recalled for maintenance by Obama rendering the Atlantic unguarded and NONE are in the Middle East.

All of a sudden Obama has to empty Guantanamo Bay of captured Jihadists and let them loose in Jihad-friendly Islamic states. He demands we close the facility.

All of a sudden America will negotiate with terrorists and trade FIVE Taliban commanders for a deserter and Jihad sympathizer. We also now pay ransom to Muslim countries to attain the release of American hostages.

All of a sudden there is no money for American poor, disabled veterans, jobless Americans, hungry Americans, or displaced Americans but there is endless money for Obama’s “Syrian refugee” resettlement programs.

All of sudden there is an ammunition shortage in the USA.

All of a sudden, the most important thing for Obama to do after a mass shooting by two Jihadists, is disarm American Citizens.

All of a sudden, the President of the United States cannot attend the Christian Funerals of a Supreme Court Justice and a former First Lady because of previous (seemingly unimportant) commitments.

All of a sudden we have Muslims with positions in the White House, making policy and with access to classified material.

All of a sudden, I’m sick to my stomach. I’m not sure the majority of Americans recognize the seriousness of the situation and how much “progress” has been made by Islam these last 7 years – a very brief time compared to an 80 year lifetime!