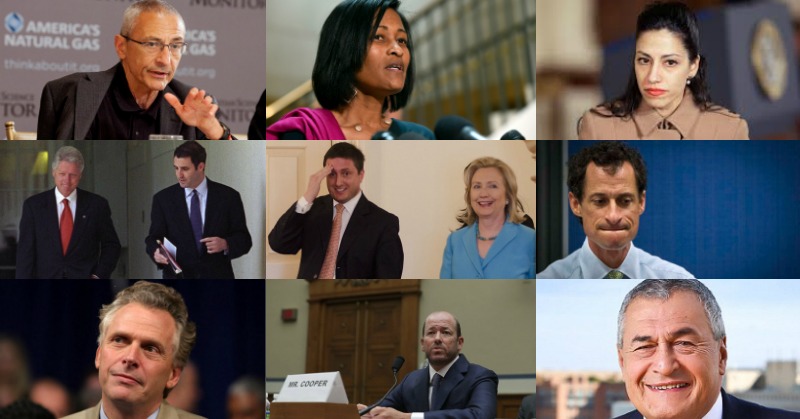 Five separate FBI investigations are underway of individuals extremely close to the Clinton family. These individuals are part of the Clintons’ inner circle, dubbed Clintonworld, according to the U.K. Daily Mail.

The five known investigations are into: Anthony Weiner, Huma Abedin’s estranged husband sexting a 15-year-old; the handling of classified material by Clinton and her staff on her private email server; questions over whether the Clinton Foundation was used as a front for influence-peddling; whether the Virginia governor broke laws about foreign donations; and whether Hillary’s campaign chairman’s brother did the same.

Let’s take a look at some of the Clinton cronies that are involved.

Abedin, a top aide whom Clinton has reportedly considered like a second daughter, is involved in two ways. First, her disgraced husband, former New York Congressman Anthony Weiner, is being investigated for allegedly sexting with a 15-year old girl, which led to the reopened investigation of Clinton’s use of private servers as Secretary of State due to emails found on Weiner’s laptop.

The second probe involves the Clinton Foundation: whether or not there is proof of a pay-to-play scandal there and what role Abedin played in it.

Last but not least, Abedin may be in trouble for perjury as she said, under oath as part of a federal investigation, that she turned over all devices that had emails from Clinton’s private server.

The current Democrat Governor of Virginia is involved in two separate investigations. The first has to do with the Clinton Foundation where McAuliffe was on the board of directors in 2004.

There are 120 donors who have contributed to both Virginia Gov. Terry McAuliffe and the Clinton Foundation, giving a total of $13.4 million to the governor’s campaigns, inauguration, state party and political action committee. That increases to nearly $18 million if donors to Hillary Rodham Clinton’s 2016 presidential campaign are included.

The second investigation involves foreign donations and whether or not they illegally influenced U.S. elections — $120,000 from a Chinese man named Wang Wenliang that went to McAuliffe.

Mills is a Clinton insider and one of the infamous five that got immunity deals from the Department of Justice. Mills is a lawyer who advised former President Bill Clinton during his impeachment and Hillary Clinton during her email scandal, and served as Clinton Foundation director as well as State Department Chief of Staff.

Mills is involved in the Clinton email probe.

Other notable people involved in the web of FBI investigations:

Phillipe Reins: intricately involved with Clinton and IT issues as the State Department, served as press secretary during Clinton’s time as senator, press secretary for Clinton’s 2008 campaign, and Chelsea Clinton’s spokesman during that campaign.

John Podesta: Slick Willy’s first White House deputy chief of staff and subsequently his chief of staff, took the reins at the Clinton Foundation in 2011 and is currently Hillary Clinton’s campaign chairman.

Oh, and he’s also a pretty prolific emailer, which we know thanks to WikiLeaks.

The Clinton Foundation probe has him in its sights.

Tony Podesta: Podesta’s brother who has the Russian connections Hillary seems to be so afraid of. His probe involves “undeclared lobbying for foreign government,” according to The Daily Mail.

He co-funded the Podesta Group with his brother and their connection to the pro-Russian former President of Ukraine, Viktor Yanukovych, who is now exiled in southern Russia and has been accused of having ties to Vladimir Putin.

Former Trump campaign chairman Paul Manafort stepped down when his company was investigated for essentially the same thing — something the Clinton campaign seized on.

Doug Band: Band was Bill’s “body man” in the White House and until 2011, he served as Bill’s chief aide. Now he’s CEO of Teneo Holdings.

This guy helped the Clinton mafia get very rich, and now he’s being investigated for how that happened.

Justin Cooper: Cooper goes back to Slick Willy’s time in the White House — he was a staff assistant for Oval Office operations and subsequently edited lecherous Bill’s memoir “My Life.” Cooper also served as Doug Band’s right-hand man and now works at Teneo with him.

Oh, and he’s the one who registered the Clintonemail.com private server domain. I’d probably leave that off my resume (and everything else, really).

He also took a hammer to Clinton’s tech devices. He’s part of the Clinton Foundation and Clinton email probes.