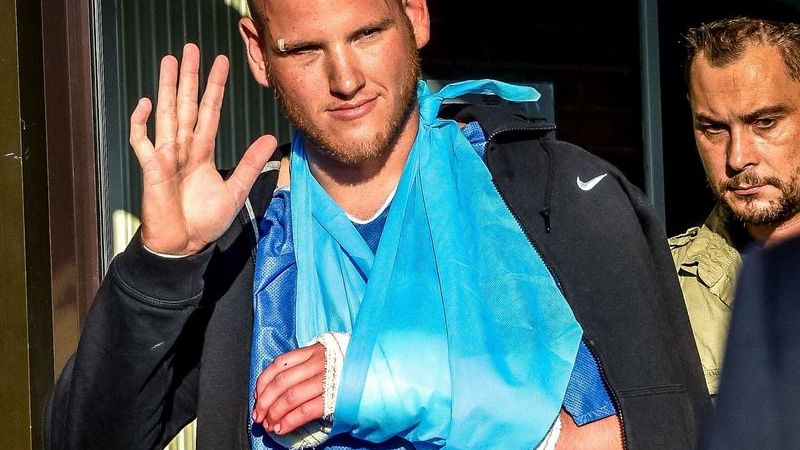 Three Americans and a Briton were awarded France’s highest honor on Monday, after they helped to stop a terrorist attack on a high-speed train en route to Paris from Amsterdam on Friday.

The Legion of Honor, which was created by Napoleon Bonaparte to reward outstanding merit, was conferred upon the men by French President Francois Hollande.

“One need only know that Ayoub El Khazzani was in possession of 300 rounds of ammunition and firearms to understand what we narrowly avoided, a tragedy, a massacre,” the French head of state said at the ceremony.

“Your heroism must be an example for many and a source of inspiration,” President Hollande commended. “Faced with the evil of terrorism, there is a good, that of humanity. You are the incarnation of that.”

The three Americans—Airman First Class Spencer Stone, National Guardsman Alek Skarlatos, and their friend Anthony Sadler, were on a tour of Europe. They originally planned on spending Friday night in Amsterdam, but their last minute change of plans possibly saved hundreds of lives. Instead of spending the night they boarded a high-speed train to Paris.

Soon after crossing into France they heard a gunshot. They then saw Khazzani brandishing an AK-47 assault rifle. A Frenchman who wishes to remain anonymous was the first to tackle Khazzani. Another man, Mark Moogalian, a passenger with dual American and French citizenship, also struggled with the attacker and suffered a gunshot wound in the process. Both of those men will also receive Legion of Honor award on a later date.

Skarlatos, who had just returned from deployment in Afghanistan, looked to Airman Stone and shouted “let’s go, go!” Stone charged the man from “a good 10 meters” away, according to Skarlatos. Stone reportedly grabbed the gunman by his throat, but he fought back, slashing wildly with a sharp blade.

Khazzani “pulled out a cutter, started cutting Spencer,” Chris Norman, the British consultant, told television interviewers. “He cut Spencer behind the neck. He nearly cut his thumb off.”

Norman then joined the efforts of Stone, Skarlatos, and Sadler to subdue the gunman. Norman recalled that the man “put up quite a fight.”

“My thought was, ‘I’m probably going to die anyway, so let’s go.’ Once you start moving, you’re not afraid anymore,” Norman told a news conference in Arras on Saturday.

After Stone choked the terrorist till he was unconscious, Norman used his tie to bind him.

Skarlatos took the suspects AK-47 and began patrolling carriages for other gunmen. He realized at that point that the gunman’s firearm had malfunctioned.

“He had pulled the trigger on the AK. The primer was just faulty, so the gun didn’t go off, luckily,” Mr. Skarlatos said. “And he didn’t know how to fix it, which is also very lucky.”

The gunman had also failed to load his pistol correctly.

“There was no magazine in it, so he either dropped it accidentally or didn’t load it properly, so he was only able to get what appeared to be one shot off,” Skarlatos said. “I mean, if that guy’s weapon had been functioning properly,” he added, “I don’t even want to think about how it would have went.”

The four men have been hailed as heroes, something all of them brushed off.

“It wasn’t heroism, it was what needed to be done in a situation of survival,” Norman said.

At a news conference from the American Ambassador’s home on Sunday, the Americans downplayed suggestions they were heroes, claiming their actions were simply their training and survival instincts.