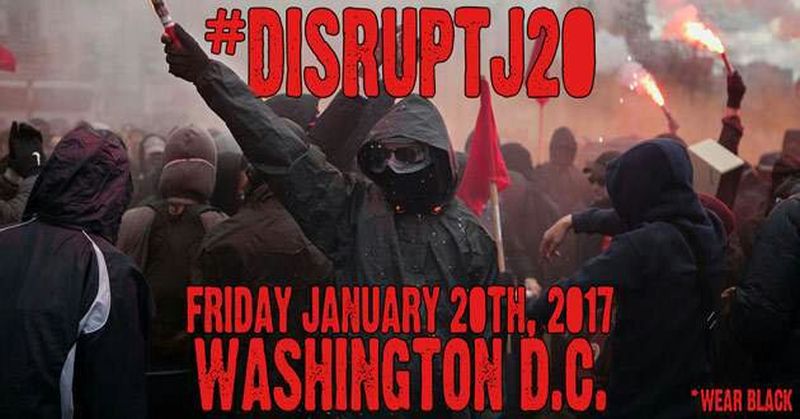 Anarchists and radicals have pledged to put Washington D.C. in a state of “total paralysis” when Trump takes the presidency on Inauguration Day, January 20th.

The disruption isn’t going to be peaceful, even according to those rallying for DisruptJ20, who oppose not just the election results, but elections in general.

“Rather than using the democratic process as an alibi for inaction,” their video, “No Peaceful Transition” states.  “We must show that no election could legitimize [Trump’s] agenda.  Neither the democrats nor any other political party or politician will save us, they just offer a weaker version of the same thing.”

“We’re not just organizing some boring-ass march,” one of the organizers, Legba Carrefour, told Vocativ. “We want direct action.”

The goal, he said, is to simply create a disruption and “build on an evolving movement.”

[…] On social media, under the hashtag #DisruptJ20, some activists are openly calling for violence—”non-peaceful Trump transition” is a familiar refrain. Carrefour wouldn’t say whether he condones or encourages demonstrators to use violence. “We’re just providing an infrastructure. I can’t comment on what anyone else is doing,” he said.

Social media is buzzing with “activists” who promise to mob the capital, making no promises for a peaceful protest.  16 anarchist and radical protest groups have already pledged to join in so-called direct action on Inauguration Day.

Steal this: Open Call for mobilization against the inauguration of Donald #Trump on January 20, 2017 #DisruptJ20 pic.twitter.com/jBY0AnjUlA

D.C. is preparing for the anarchists’ disruption, getting ready for massive crowds of very angry people.

The city and federal law enforcement officials are already preparing for what will likely be a chaotic day in D.C.—they’re expecting up to 30,000 protestors and will “plan accordingly,” according to local media outlets.

If you don’t get everything you want, anarchists want you to blame everyone and anything American.  Elections and capitalism alike are seen to be evil by these wackos.  Calling for anarchy indicate these radicals have zero respect for law and order.

So get ready for destruction.