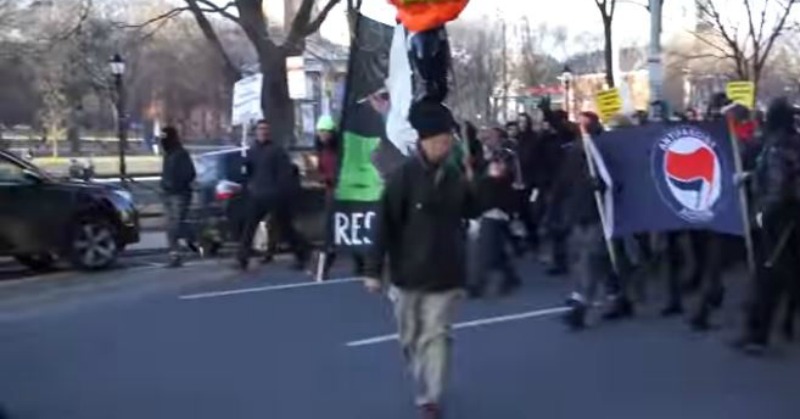 Here we have yet another example of how dangerous it can be when protesters decide to block a street. During anti-Trump protests over the weekend in New Haven, Connecticut, a critically-ill patient was blocked from getting to the hospital, according to Fox61.

Approximately 100 to 200 people demonstrated against President Trump’s executive orders on immigration by blocking off Route 34 on Saturday, the Hartford Courant reports. The ambulance was among the vehicles blocked. State police said the EMTs had to perform an emergency medical procedure in the back of the ambulance due to the delay.

Video from the protest shows demonstrators chanting pro-amnesty slogans like “No hate! No wall! Sanctuary for all!” and pledging to “tear down this racist wall.”

Clement, one of the leaders of the protests, was hit with a handful of charges, including inciting a riot and reckless use of the highway by a pedestrian.

Attorney Patricia Kane, who is representing the protesters, blamed police for the ambulance’s blockage, telling Fox61 that the police didn’t inform the protesters that an emergency vehicle needed to pass through their blockade.

There are laws in place for a reason and protestors fail to understand that they do not have a right to stop people from getting where they need to go — especially when we’re talking about life and death.

It isn’t a “peaceful protest” when protestors illegally block roads and stop people from getting to where they need to go and, in many cases, intimidate and threaten drivers.

There’s no excuse for this kind of deplorable behavior and it should not be encouraged, yet leftists support and push it.

This isn’t “peaceful protesting”; it’s anarchy and it shouldn’t be tolerated.

Oh, and about the anarchists and their claims that it’s the police’s fault — take a look at what Fox61 reported:

State police tried to find and identify the leader of the protest, who was leading the protest using a microphone and loudspeaker. Officers eventually located Norman Clement, 67, of New Haven, on the corner of Church and Chapel Streets.

Clement ran away from police through the crowd, knocking over several of his supporters, before being apprehended, according to state police, and then actively resisted arrest and was sprayed with pepper spray.

Clement was charged with inciting a riot, disorderly conduct, interfering with an officer and reckless use of the highway by a pedestrian. He was released on a $5,000 bail and was scheduled to appear at New Haven Superior Court on Monday, February 13.