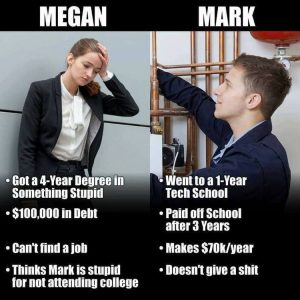 Brian Thomas reports tuition prices have skyrocketed in recent decades, and the most expensive college in your state will amaze you the prices they charge their students with.

Things have changed dramatically since then.

The average annual increase in college tuition from 1980-2014 grew by nearly 260% compared to the nearly 120% increase in all consumer items.

In 1980, the average cost of tuition, room and board, and fees at a four-year post-secondary institution was $9,438, according to the Department of Education. That number has since climbed to $23,872.

The price of tuition varies greatly from state to state, so what students pay for college depends greatly on where they live.

A map by Business Insider marks the most expensive college in each state. “We found these numbers,” Business Insider explains. “By examining the average cost of tuition, fees, and room and board that an incoming student would face over the 2015-2016 academic year.

The most expensive college on the east coast is New York’s private research university, Columbia University, with an annual tuition fee of $66,383.

Wyoming’s most expensive college, meanwhile, the University of Wyoming, has a tuition of “just” $25,668 for an out-of-state student.

Wyoming is one of just three states whose most expensive colleges cost less than $30,000 a year, along with North Dakota and Alaska.

Since there’s more students attending, keeping tuition prices on par only with inflation would mean missing out on a fortune.

Some leftists allege that cuts on public funding for higher education contribute to rising tuition costs, a claim so ridiculous, even the New York Times, normally defensive of such liberal arguments, called it a myth.

Subsidized loans, with guaranteed “bail-out” payback from tax dollars,  really do drive tuition prices up. We reported on the issue here.

After plenty of research, the findings are conclusive.

A 2015 study found that a dollar of subsidized (non-PLUS) student loans increases published tuition by 58 cents at a typical college, with larger effects once reductions in institutional financial aid are taken into account. An NBER paper issued last year concluded that changes to federal student loans are more than sufficient to explain tuition increases at private nonprofit colleges. And a 2014 analysis found that for-profit colleges eligible for federal student aid charged tuition 78% higher than that of similar but aid-ineligible institutions.

That’s right. Colleges eligible for federal student aid charged 78% higher than those that didn’t. After all, why would anyone not take advantage of the almost too ridiculous to be true offer of a guaranteed payload, no matter what ridiculous number you make up off the top of your head to charge?

Only an idiot would pass up an opportunity like that, but what kind of a person offers it?