Audi is going to be the latest company to mix politics and sports when they air their Super Bowl ad Sunday afternoon.

There’s no humor in this ad, which promotes “gender pay equality.”

“What should I tell my daughter,” the 60-second spot begins as a proud father watches his daughter speed around a go-cart track. “That she will automatically be valued less than every man she’ll ever meet?”

This is on the heels of the false narrative perpetuated by leftists (and Barack Obama himself) that women make 79 cents for every dollar a man makes.

It simply isn’t true. It’s a lie perpetuated by feminists and other leftist groups to delegitimize genuine work and make men feel guilty.

In truth, the 21-cent difference is simply the difference between the average earnings of all men and women working full time.

It doesn’t take into account differences in occupations, positions, education tenure or hours worked. When all that is taken into account, the wage gap narrows to five cents.

And nobody knows with certainty if that five cents is the result of discrimination, or women’s lack of ability to negotiate pay raises like men do.

Here’s a list of the most well-paying jobs in the workforce. Men outnumber women in all but one of them:

Now here’s a list of the least well-paying jobs. Women prevail in nine out of ten of these.

The truth behind this “gender pay gap” is more complex than simplistic numbers spit out by a car company during a Super Bowl ad.

How do we know? Because in this exchange between the Audi twitter feed and a follower, the car company admits the numbers they’re spitting out are bogus. Audi tweeted: “Women are still paid 21% less than men. As a brand that believes in progress, we are committed to equal pay for equal work.”

When the follower said: “You pay your female employees less than males? You know that’s against the law, right?” Audi responded with the truth.

“When we account for all the various factors that go into pay, women at Audi are on par with their male counterparts.” 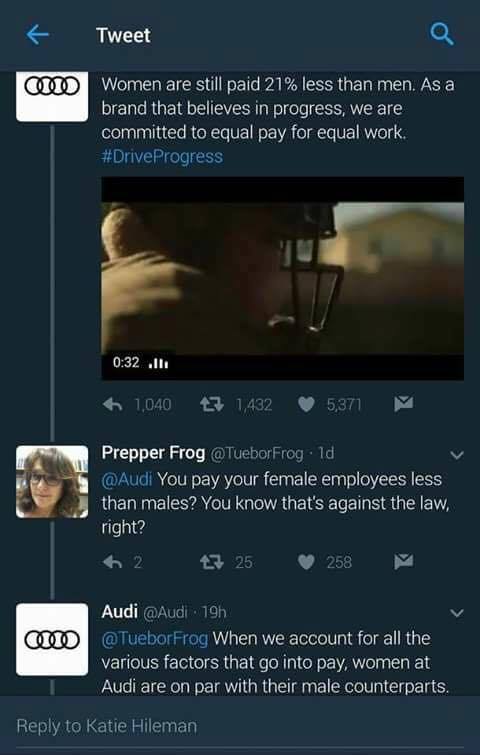 But Audi must have decided they need to sell more cars to women and dimwitted men who feel guilty about making more than their wives.