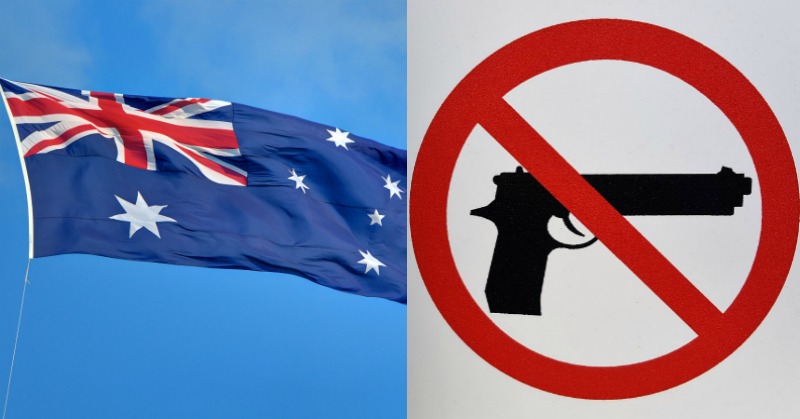 Despite strict gun laws and a failed buyback program, Australia still has an estimated 260,000 illegal firearms in the country. Australia’s Justice Minister has all but admitted defeat and has called for an amnesty program that would enable people to turn in their illegal firearms without “fear of prosecution.” Aside from being prosecuted for wanting to arm themselves, of course.

Australia on Friday announced a gun amnesty for next year after a criminal intelligence report estimated there were 260,000 illegal firearms in the country.

Australia introduced tight curbs on gun ownership after the massacre of 35 people by a lone gunman in and around a cafe at a former prison colony in Tasmania in 1996.

Justice Minister Michael Keenan outlined the “amnesty plan” in the wake of the failed buyback program to reporters in Melbourne:

The amnesty will provide an opportunity for those individuals who, for whatever reason are in possession of an unregistered firearm, to hand it in without fear of being prosecuted.

While Australia has some of the strongest firearm controls in the world, illicit firearms remain the weapon of choice for criminals.

The Federalist exposed the false success claims of the Australian gun restrictions that have actually been clear failures:

In fact, according to the Australian government’s own statistics, a number of serious crimes peaked in the years after the ban. Manslaughter, sexual assault, kidnapping, armed robbery, and unarmed robbery all saw peaks in the years following the ban, and most remain near or above pre-ban rates. The effects of the 1996 ban on violent crime are, frankly, unimpressive at best.

It’s even less impressive when again compared to America’s decrease in violent crime over the same period. According to data from the U.S. Justice Department, violent crime fell nearly 72 percent between 1993 and 2011. Again, this happened as guns were being manufactured and purchased at an ever-increasing rate.

The media has also tried to cover up the truth with claims that there have been no mass shootings since Australia’s highly restrictive gun laws were put in place. Bearing Arms reported:

At Monash, seven people were shot (two fatally) by a murderous student who was armed with multiple handguns. All six handguns were acquired legally.  The attacker was later determined to be mentally ill. The Hectorville siege that saw seven people shot(three fatally) was conducted with a shotgun that was legal under Australian law. The attacker in this incident was also found to be mentally ill. The Hunt family murders were likewise carried out with a legally-owned shotgun. The murderer in this instance was thought to be highly stressed due to his wife’s head injury.

In spite of the evidence and common sense, Democrat presidential nominee Hillary Clinton has said that Australia’s failed buyback program is something that we should consider here in the United States.

This is a disturbing combination of two things: the left’s bizarre fixation on celebrating failure and their crusade to “fundamentally transform” America by stripping us of our constitutional rights.

A Clinton presidency would be a disaster on a variety of levels. We’ve already seen many examples of how her dangerous policies have failed other countries in the Western world, yet she and her cronies insist on implementing them. That is why this election is so critical — this country may not survive a Clinton presidency.