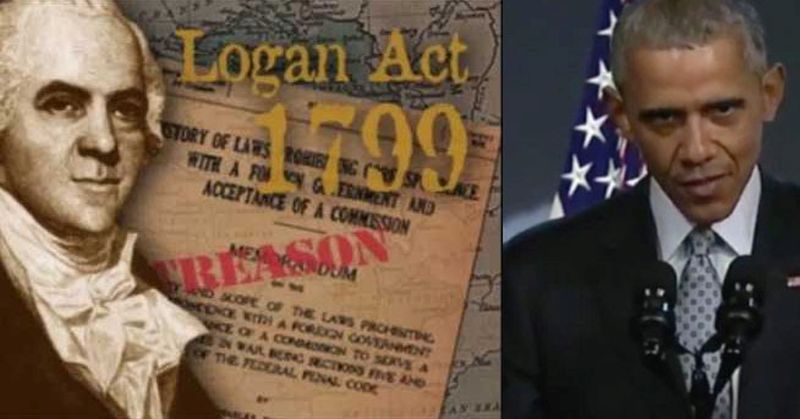 For some unknown reason Barack Obama met with South Korea’s new leader almost immediately after he returned from a meeting with President Trump. The Korea Herald reports:

President Moon Jae-in renewed his resolve to pursue sanctions and dialogue to tackle North Korea’s nuclear program during a meeting with former US President Barack Obama on Monday, saying now is the “last chance” for the regime to return to the negotiating table.

During the 40-minute talk, Moon shared the results of his recent summit with his incumbent US counterpart Donald Trump, asking for Obama’s advice on ways to advance the relationship.

This could be construed as a violation of the Logan Act as defined by Cornell Law School:

Nevertheless the New York Times reports the history of prosecuting people under the Logan Act is well, slim:

The Logan Act appears to be a so-called dead letter, meaning a law that remains technically on the books but is essentially defunct or toothless.

A study by the Congressional Research Service in 2015 said nobody has ever been prosecuted under the statute and identified only one instance of an indictment under the law: in 1803, the United States attorney in Kentucky obtained from a grand jury an indictment of a Kentucky farmer who had written an article in support of creating a separate nation in the territory west of the fledgling United States that would be an ally to France. But the prosecutor dropped the case. A recent draft scholarly paper posted online by a Federal Appeals Court law clerk identified a second apparent such indictment, involving the reported arrest in 1852 of a man who wrote a letter to the president of Mexico.

Yet the NYT thought the Logan act should have been used against Michael Flynn. Wonder what they think about it being used against former President Obama?

Obama needs to stop sticking his nose where it doesn’t belong and honor the tradition of past Presidents by disappearing from the stage for a while and shutting the hell up.

America has spoken, and President Trump is in charge. Your time is over, GO AWAY!

If Obama continues to stick his nose in the middle of delicate negotiations between the USA and other nations, should he be prosecuted under the Logan Act?