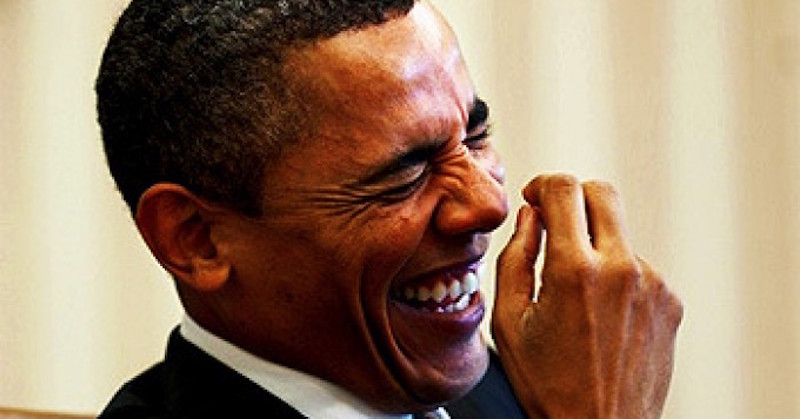 So Barack Obama has leveled a particularly bizarre accusation at Donald Trump that probably won’t stick.

At a rally in Columbus, making the case for Hillary Clinton, he (and the rest of the Democrats) have decided to hitch themselves to Michelle Obama’s “when they go low, we go high,” slogan, talking about – I guess – how “low” Donald Trump is. Donna Brazile, the disgraced Democratic official, actually tweeted this new mantra:

"When they go low, we go high!" Michelle Obama.

Anyway, while talking about all the awful things about Trump, Obama said something that our friends at HotAir caught that – just as they did – we will offer without commentary (yet):

“If you disrespect the Constitution by threatening to shut down the press when it doesn’t say things you like or threaten to throw your opponent in jail or discriminate against people of different faiths. If you do that before you are elected, then what are you gonna do when you have actual power to do those things?”

So, taking the specific examples he gives, let’s discuss how President Barack Obama has “disrespected” the Constitution:

Here’s the first one: “Threatening to shut down the press when it doesn’t say things you like”

The Obama administration made a deliberate effort to exclude Fox News from a press pool during the height of its war with the network, newly released documents show.

At the time, in the fall of 2009, the administration dismissed the matter as simply a mistake. “There was no plot to exclude Fox News, and they had the same interview that their competitors did. Much ado about absolutely nothing,” the Treasury Department said in a statement. But internal e-mails obtained by the watchdog group Judicial Watch show that the attempted exclusion from an interview with federal pay czar Ken Feinberg was part of a deliberate strategy. The attempt failed when the other networks refused to go along unless Fox was included.

Here’s the second one: “Threaten to throw your opponents in jail.”

After publishing undercover footage of Planned Parenthood harvesting organs from the bodies of aborted babies and discussing agreements to sell those baby organs, Daleiden became public enemy number one for Democrats. A Texas district attorney tried to charge Daleiden and his investigative partner for organ trafficking, a misdemeanor, and tampering with a government record, a felony.

From the beginning, the case against Daleiden showed obvious conflicts of interest. As The Federalist reported, “the district attorney who indicted Daleiden has received more than $25,000 in campaign contributions from the defense attorney for abortionist Douglas Karpen, who has been described as the Kermit Gosnell of Texas.” California Attorney General Kamala Harris, who had Daleiden’s home raided after the videos emerged, had financial ties with Planned Parenthood.

The charges were eventually dropped, after it was discovered the prosecutor “illegally shared evidence against Daleiden with Planned Parenthood, even though the Texas Attorney General’s office explicitly prohibited it.”

Little Sisters of the Poor

The Obama administration tried to fine this Catholic organization, which cares for impoverished elderly individuals, for refusing to provide birth control to their employees. The Little Sisters didn’t want to be compelled to hand out contraceptives, as it violates their religious beliefs, but Obama’s Health and Human Services took them to court to try to force them to pay $70 million in fines per year, which would have likely bankrupted the organization.

And finally, the third one: “Discriminate against people of different faiths.”

HotAir has several good examples of this, but this one is our favorite:

In a bombshell email from September 2008, advisers to Barack Obama’s presidential campaign consciously decided to choose Arab Muslims over Arab Christians in suggesting top staff positions should Obama win the White House. The email was released by WikiLeaks in its latest series, “The Podesta Emails.”

Former New York Solicitor General Preeta D. Bansal sent the email to Michael Froman, a classmate of Obama’s at Harvard and a member of the 12-person advisory board for the Obama campaign’s transition team. The email came with “the compiled lists of Asian American and Muslim American candidates for top Administration jobs, sub-cabinet jobs, and outside boards/agencies/policy committees.”

So yeah… Obama knows a little something about “disrespecting the Constitution.”