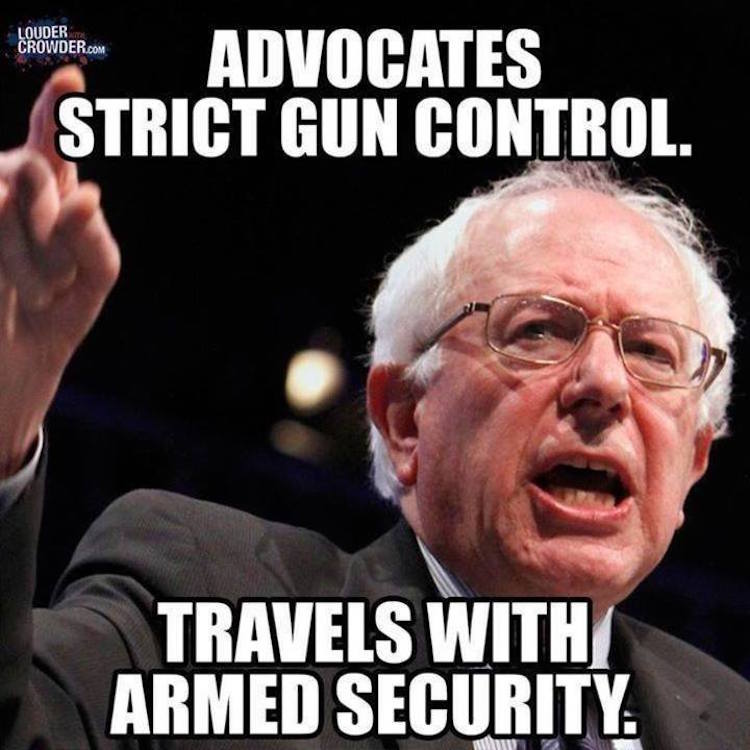 That said, it’s not just Bernie, as all of the leading Democrats are hypocrites and liars when it comes to guns and gun control:

After the horrific Parkland School shootings, the failed 2016 Democratic candidate tweeted a series of nonsense statistics and pro-gun-control “facts” that are totally bogus.

She also framed it with the typical leftist whiny rhetoric.

“This week we lost 17 Americans in Parkland – the deadliest school shooting since Sandy Hook in 2012. Since then, 438 people have been shot and 138 killed in over 230 school shootings,” she wrote. “That’s 5 school shootings every month, 16 of which classify as “mass shootings.”

“Now is the time to listen to the students, teachers, and parents demanding that we end this carnage once and for all with gun safety laws that keep guns out of the hands of those who shouldn’t have them.”

Now is the time to listen to the students, teachers, and parents demanding that we end this carnage once and for all with gun safety laws that keep guns out of the hands of those who shouldn’t have them.

Of course, these are total lies that even the mainstream media can’t stomach. The statistic she quoted – “438 people have been shot and 138 killed in over 230 school shootings” –  is from the pro-gun control Everytown for Gun Safety, a group supported by pro-gun control Michael Bloomberg. The Washington Post even admitted it with a headline that read “No, there haven’t been 18 school shootings in 2018. That number is flat wrong.”

“The figure originated with Everytown for Gun Safety, a nonprofit group, co-founded by Michael Bloomberg, that works to prevent gun violence and is most famous for its running tally of school shootings,” the newspaper reported.

“A tweet by Sen. Bernie Sanders (I-Vt.) including the claim had been liked more than 45,000 times by Thursday evening, and one from political analyst Jeff Greenfield had cracked 126,000. New York City Mayor Bill de Blasio tweeted it, too, as did performers Cher and Alexander William and actors Misha Collins and Albert Brooks. News organizations — including MSNBC, ABC News, NBC News, CBS News, Time, MSN, the BBC, the New York Daily News and HuffPost — also used the number in their coverage.”

“Everytown has long inflated its total by including incidents of gunfire that are not really school shootings. Take, for example, what it counted as the year’s first: On the afternoon of Jan. 3, a 31-year-old man who had parked outside a Michigan elementary school called police to say he was armed and suicidal. Several hours later, he killed himself. The school, however, had been closed for seven months. There were no teachers. There were no students.

“Also listed on the organization’s site is an incident from Jan. 20, when at 1 a.m. a man was shot at a sorority event on the campus of Wake Forest University. A week later, as a basketball game was being played at a Michigan high school, someone fired several rounds from a gun in the parking lot. No one was injured, and it was past 8 p.m., well after classes had ended for the day, but Everytown still labeled it a school shooting.”

What do you think? Is it possible that Hillary or Bill Clinton could ever stop lying?

Will the Clintons’ ever be held accountable for their lies and alleged crimes?

Sound off and let us know your thoughts in the comment section below.