The Democrats have said that if Republicans move forward with replacing Ruth Bader Ginsburg before the election, even though the Constitution and precedent clearly give him that right, then its time to burn it all down.

While most people dismiss that kind of rhetoric as extreme, never meant to be fulfilled, it does appear that this time those on the left may be serious and we should pay attention and be prepared to defend our homes and families.

Last night in Brooklyn Minnesota unknown arsonists allegedly set fire to a family home, destroyed several vehicles as well as their Trump sign and spray painted their garage with a pro-Biden message.

Here’s a screenshot of an image and message posted on Facebook: 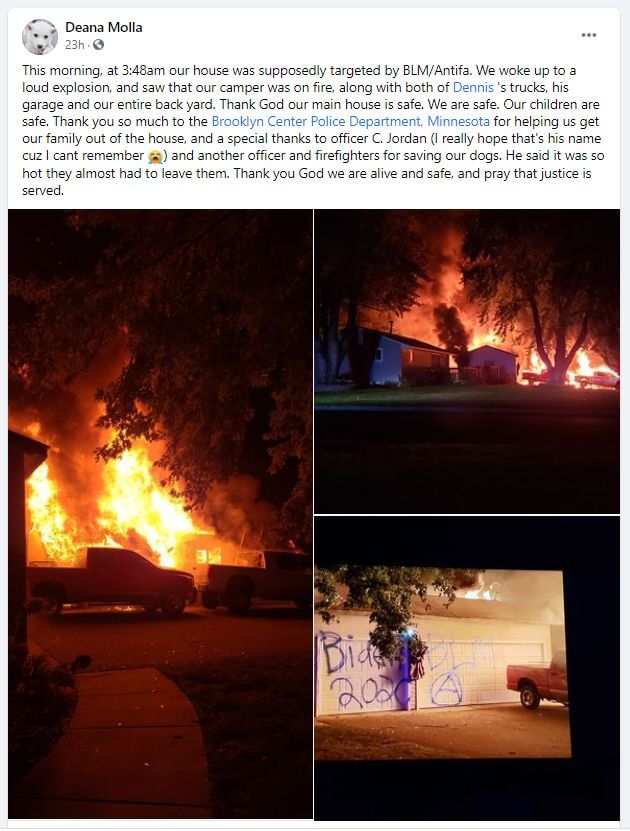 The message reads “This morning, at 3:48am our house was supposedly targeted by BLM/Antifa. We woke up to a loud explosion, and saw that our camper was on fire, along with both of Dennis ‘s trucks, his garage and our entire back yard.

Thank God our main house is safe. We are safe. Our children are safe.

Thank you so much to the Brooklyn Center Police Department, Minnesota for helping us get our family out of the house, and a special thanks to officer C. Jordan (I really hope that’s his name cuz I cant remember 😭) and another officer and firefighters for saving our dogs.

He said it was so hot they almost had to leave them. Thank you God we are alive and safe, and pray that justice is served.”

The police report of the incident:

“Just before 4:00 am, Brooklyn Center police officers and firefighters were dispatched to the report of an explosion and fire in the area of 69th Ave N and Morgan Ave N in Brooklyn Center. Officers located a fire at a residence in the 6900 block of Morgan Ave N. Firefighters quickly extinguished the fire, but not before a detached three car garage and three vehicles were destroyed.

There was minor damage to the house. There were no injuries during this incident. Officers and firefighters were able to save the three dogs in kennels and four puppies located in the garage.

*This fire is considered suspicious and our investigation remains extremely active.

The home occupants had a fairly large “Trump 2020” sign that was destroyed, and our officers observed what appeared to be fresh spray paint on the garage before it burned down. The spray paint included “Biden 2020”, “BLM” and capital letter “A” with a circle around it.”

A GoFundMe has been set up to help the family.

While not all of the facts surrounding this incident are known given the violent rhetoric we have heard from the left it is not unreasonable to assume that those on the far left are in fact trying to burn it all down.