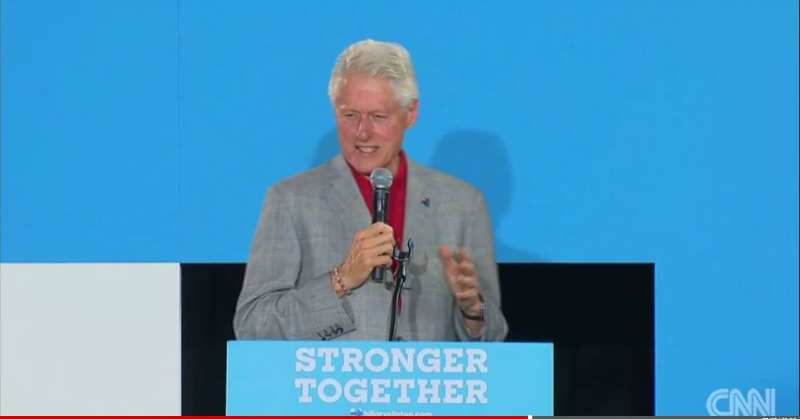 The saga surrounding Democrat presidential nominee Hillary Clinton’s health, and her lies and obfuscation to obscure it, has just gotten a little more ridiculous, if that’s possible, after her husband’s remarks on the campaign trail Wednesday.

Old Slick Willy spoke about his wife in Las Vegas, NV where his flippant comments either exposed their sham of a marriage, or the fact that it’s tough to keep that many lies straight. Likely a combination of the two.

“I just talked to her and she’s feeling great and she will be back out there tomorrow. So I—it’s  a crazy time we live in when people think there is something unusual about getting the flu. The last time I checked millions of people were getting it every year,” Clinton told a crowd in Las Vegas.

Lots of people do get the flu every year Bill, but the problem is that according to her campaign, your wife wasn’t one of them, at least not in this instance.

After Hillary collapsed and had to be dragged like a sack of potatoes into a motorcade van by two Secret Service agents at a 9/11 memorial event in Manhattan on Sunday, her campaign was forced to admit that Clinton has something a bit worse than “seasonal allergies.”

Hillary’s physician, Dr. Lisa Bardack, claimed that the candidate collapsed due to “overheating” and “dehydration” after being diagnosed with pneumonia on Friday.

A spokesman for the Clinton campaign claimed that Bill simply misspoke, according to Politico. Bill must have meant that one of his jogging buddies had the flu.

Bill Clinton, notorious for his skills as an orator, just misspoke about his wife’s illness? Hillary’s health has exploded in the news and that’s the best Bill can do to maintain the farce?

Maybe their likely marital agreement for him to be president and then her just isn’t that interesting to him anymore — although given Hillary’s health, it seems unlikely that Bill would give up his chance to effectively run the White House again (and get his hands on the interns, of course…).

There has been speculation about Bill’s health as well, so perhaps it’s a simple case of too many lies and old age/poor health making it difficult to keep them straight.

Then again, this isn’t the first time this week that Bill has slipped about Hillary’s health. The former president told Charlie Rose about his wife’s fainting issues, “because frequently—well not frequently, rarely—but on more than one occasion, over the last many, many years, the same sort of thing happened to her when she got severely dehydrated.”

CBS went ahead and edited “frequently” out of the broadcast, by the way.

Between the lies about Hillary’s health, the pay-to-play scandal, deleted emails, private servers, etc., the cloud of smoke covering the truth in the Clinton campaign may be getting to everyone — including her staffers who have recently gotten sick as well.