He’s weathered a lot of ups and downs in the economy and knows what he is talking about when it comes to the markets.

During an appearance today on CNBC he made the shocking claim that inflation is here to stay and could even be the biggest threat to society.

“I think the thing that to me is the number one issue facing the main street investors is inflation. And it’s pretty clear to me that inflation is not transitory, it’s here to stay, and it’s probably the single biggest threat to certainly financial markets and, again, probably, I think the society just in general.”

“So, this 5.5% [increase in the] CPI is a real outburst. The highest CPI we’ve had in 30 years and, of course, it’s going to go higher here in the next few months as energy feeds through it.”

If Tudor Jones is right, and there’s no reason to doubt him on this, there may be some very rough road ahead. Be prepared and don’t be caught off guard as prices rise and supplies of everyday staples and items shrink.

The poor and middle class is going to be hardest hurt by sustained inflation and if it continues there is going to be a lot more poor people in this country than there are now.

Proctor and Gamble has announced that the cost of it’s goods will be going up sharply in the coming months:

Procter & Gamble, for example, announced that many of its prices will rise in the coming weeks since the cost of raw materials remains high, according to the Post. The company owns huge brands like Tide, Gillette and Crest.

“We do not anticipate any easing of costs,” P&G chief financial officer Andre Schulten said. “We continue to see increases week after week, though at a slower pace.”

The Post cited an interview Schulten gave to The Wall Street Journal, though the WSJ appears to have removed that specific quote.

And this is not P&G’s first announcement of a price hike. Back in April, the company warned that many paper products would begin costing more, including essentials such as tampons, diapers and paper towels.

And other corporate giants such as Coca-Cola, PepsiCo and General Mills have warned buyers throughout the year that costs will keep going up, according to CNBC.

These costs keep climbing in the aftermath of the economic disruption of COVID-19, and now everyone is suffering from inflation.

The Wall Street Journal reported that U.S. inflation has reached the highest level seen in a decade.

This comes from the jump in the cost of the most basic materials that every producer needs. Lumber costs skyrocketed this spring, and wheat, copper, oil, corn, wood-pulp and other such essential raw materials have seen big surges in prices after last year’s COVID-19 economic crashes.

And with the price of materials rising, it’s only natural that corporate prices are going to follow suit. For instance, The Wall Street Journal reported that P&G is expecting to spend $2.1 billion more on transportation and raw materials. And though P&G’s shares have risen 2 percent, other giants like Unilever, Colgate-Palmolive and Kimberly-Clark have watched their shares fall 7 percent or more.

Everything the Democrats are doing seems designed to crush the average working man and turn him into a dependent slave. 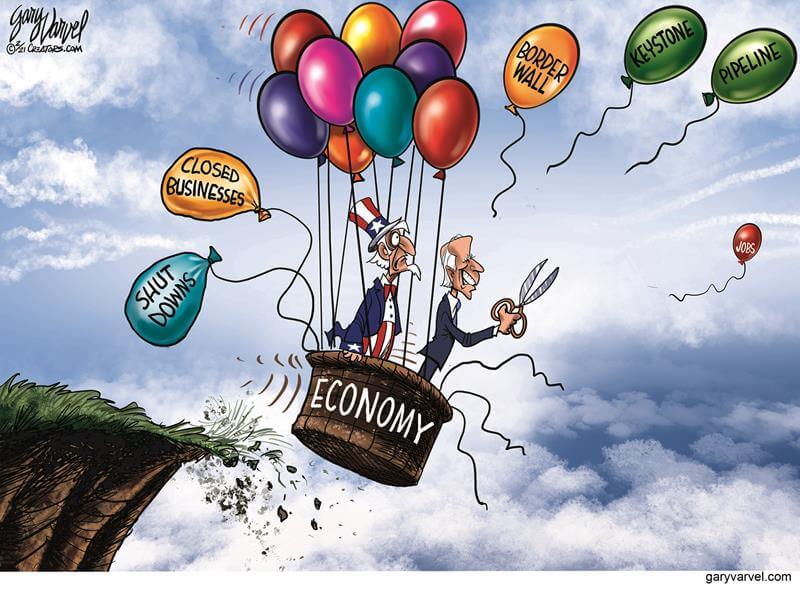