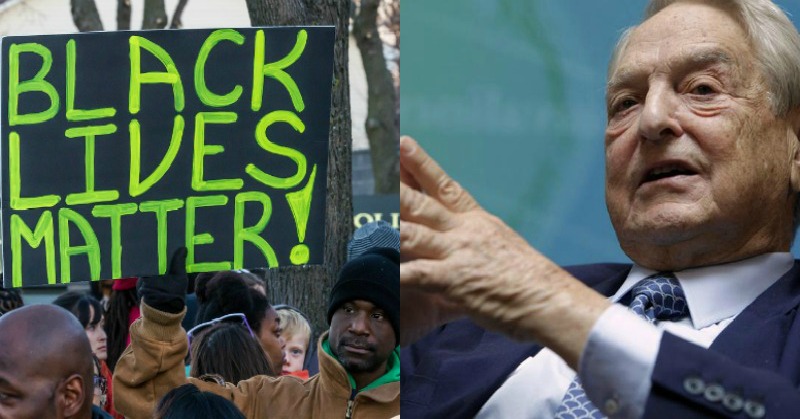 It looks like Black Lives Matter and one of their major donors, George Soros, may be getting their just desserts via a lawsuit filed by Dallas Police Department Sergeant Demetrick Pennie, President of the Dallas Fallen Officer Foundation — a black police officer.

On Sept. 16, Pennie filed an amended federal complaint in an effort to build a class-action lawsuit against a dozen institutions and individuals connected to the Black Lives Matter movement on behalf of “police officers and other law enforcement persons of all races and ethnicities including but not limited to Jews, Christians and Caucasians,” according to Breitbart.

The complaint alleged that the defendants connected to Black Lives Matter are responsible for “inciting” race riots and violence.

“The suit hopes to produce damages and an injunction placed against alleged threats of racially-motiv[at]ed violence going forward.

The defendants represent a who’s who of public figures in both racial and general political matters. Apart from founding members and public faces related to Black Lives Matter, Louis Farrakhan and the Nation of Islam; Rev. Al Sharpton and the National Action Network; Malik Zulu Shabazz and the New Black Panthers; George Soros; President Barack Obama; former U.S. Attorney General Eric Holder; and Democrat Nominee Hillary Clinton are all included in the suit.

The federal lawsuit was originally filed in the United States District Court for the Northern District of Texas.”

The 66-page complaint alleged that the defendants “repeatedly incited their supporters and others to engage in threats and attacks” against police officers across the country, including the murder of five Dallas police officers in July at a Black Lives Matter gathering where nine other individuals were wounded.

In the complaint, George Soros is outed as “the financier of the BLM Defendants and similar organizations with the goal of inciting a race war,” as well as his promotion of violence against whites and Jews.

Sergeant Pennie and I feel duty-bound to put ourselves forward to seek an end to the incitement of violence against law enforcement which has already resulted in the death of five police officers in Dallas and the wounding of seven more, just in Texas alone.

Sgt. Pennie told Breitbart Texas: “This action was brought to stop the violence and killings of law enforcement officers in Dallas and throughout the nation.”

According to the complaint, more than $500 million is being sought by the plaintiffs.

We’ve reported extensively here at TFPP about Soros being one of the major financiers behind the Black Lives Matter farce. This development could be huge, not only to hold responsible those who incited the violence, but to show on a major platform how Black Lives Matter is being used as a pawn for Soros and other leftists’ globalist agenda.

This lawsuit laid bare, in federal court, the destructive agenda of the Black Lives Matter movement and the devastation it has caused.

Hillary Clinton was also named, which adds to her miserable week and will hopefully be reflected in the polls with less than eight weeks left before the election.