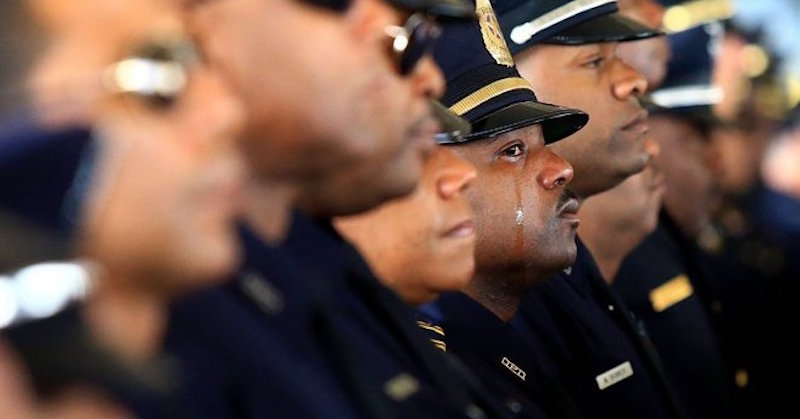 A Dallas Police Sergeant has filed a federal lawsuit against the Black Lives Matter group accusing their leaders of inciting anti-police violence.

Sgt. Demetrick Pennie, president of the Dallas Fallen Officer Foundation and a police officer for 17 years, filed the lawsuit in federal court Friday, claiming the group is inciting racial violence against law enforcement.

He wrote that he filed it on behalf of “police officers and other law enforcement persons of all races and ethnicities including but not limited to Jews, Christians and Caucasians,” Breitbart is reporting.

The defendants are not only members of Black Lives matter, but prominent race-baiting and leftist figures like Al Sharpton, Louis Farrahkan, George Soros, The New Black Panthers Party and even President Obama and Hillary Clinton.

This motley crew have “repeatedly incited their supporters and others to engage in threats of and attacks to cause serious bodily injury or death upon police officers and other law enforcement persons of all races and ethnicities.”

The suit accuses the defendants of inciting supporters and others “to engage in threats and attacks” against law enforcement officers around the country, including the July 7 murders of five Dallas police officers by Micah Johnson after a Black Lives Matter demonstration.

Pennie is represented by Larry Klayman, a lawyer from the conservative group FreedomWatch.

“Sergeant Pennie and I feel duty-bound to put ourselves forward to seek an end to the incitement of violence against law enforcement which has already resulted in the death of five police officers in Dallas and the wounding of seven more, just in Texas alone,” Klayman said in a press release.

The 66-page complaint seeks damages of more than $500 million.

In July, an editorial in the Dallas Morning News praised Pennie for inviting Cleveland Browns football star Isaiah Crowell to attend the funeral of one of the slain Dallas officers after Crowell briefly posted an anti-police image on social media in anger over the deaths of African Americans in police-involved shootings nationwide.

Sgt. Pennie told Breitbart Texas that he felt he had a duty to stand for officers in Texas and across the nation.

“This action was brought to stop the violence and killings of law enforcement officers in Dallas and throughout the nation.”

Here is a copy of the lawsuit: