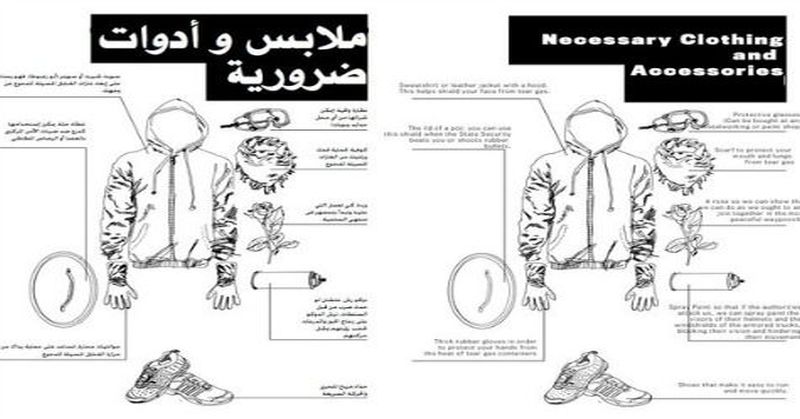 Ashley Yates, a Black Lives Matter protest organizer, has posted a guide to riotwear on Twitter.

The guide includes what rioters should wear and have, as well as instructions for thwarting police attempts at apprehending them.

The post also suggests rioters keep a rose on them, “so we can show that we can do as we ought to and join together in the most peaceful way possible.”

For uncertain reasons, the guide was posted in both English and Arabic.

“The most peaceful way possible,” sounds less than civil, both in this context and considering Yates’ history of inciting destructive rioting.

The Guardian quoted her in 2014 after her arrest in Ferguson:

“If they can’t serve justice in this, the people have every right to go out and express their rage in a manner that is equal to what we have suffered,” said Ashley Yates, a co-founder of Millennial Activists United, who was arrested last week while protesting in Ferguson.

[…] “We’re going to take our anger out on the people who have failed us, and if they are prepared to deal with that, then let them have at it,” said Yates. Poe said that while people in America often expected “casual revolution”, Ferguson may be “the moment when we can’t do that.”

Yates learned organizing when she was the political chair of the Legion of Black Collegians at the University of Missouri Columbia; the group who was behind last year’s campus uprising there. Yates was not with the group at the time of that protest, however.

According to BreitBart, Yates posted her riotwear guide just after reposting a piece from Cleveland.com about the city buying riot control gear in preparation for the Republican National Convention.

Cleveland has reason to prepare.

Black Lives Matter cofounder Patrisse Cullors promised to “shut down” the Republican National Convention, which will be held this summer.

On MSNBC last year, Cullors said:  “…many folks have asked why would you go after the Democratic party? They’re on our side. What about the Republican party? And trust and believe that any opportunity we have to shut down a Republican convention, we will. We will make sure that our voices are made loud and clear.”

What would happen if violent riots broke out in Cleveland during the Republican National Convention?  Is instructing rioters to spray paint the windshields of police vehicles inciting violence?

Tell us what you think and sound off in the comments.