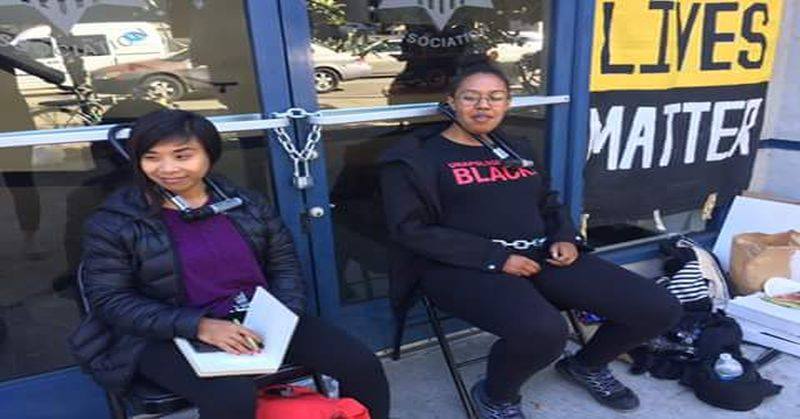 According to the Black Lives Matter website, their movement is a “beautiful struggle that is restorative, not depleting” and works “vigorously for freedom and justice for Black people, and by extension, all people.”

It seems their followers have not gotten that message as a disturbing, ugly, and downright deadly trend has emerged throughout the United States.

The protestors’ “beautiful struggle” is depleting the freedom and justice of all people in major cities throughout the United States by obstructing the justice system with BLM protestors chaining themselves to the doors of police precincts and obstructing traffic.

Detroit police and firefighters cut the protesters loose and arrested them. Six protesters, four women and two men, were taken into custody…

Commander Elvin Barren says people have the right to protest, but the chaining was illegal. About 100 people marched to a police station from a Detroit park.

Sit ins occurred in the police union headquarters that same day in Washington D.C. and New York City—these protests carried out into the streets where BLM activists blocked traffic and chained themselves together or to buildings.

Police had to cut protestors’ chains to disperse the crowd and make arrests.

The following morning, on Thursday, July 21st, several other BLM activists chained themselves to the doors of the Oakland Police Department demanding the mayor resign and the police budget be defunded by 50%. That money, instead, should be funneled to black communities. The protestors said they would not leave until their demands were met.

Dozens of activists and protesters took to the streets of North Lawndale on Wednesday night to demand city tax money be invested in alternatives to traditional policing.

An hour into the evening protest, about 10 demonstrators were arrested and charged with obstructing a roadway after they chained their bodies together and blocked the entrance to the Chicago Police Department’s Homan Square facility…

…When the group that was chained together refused to move, police took them into custody.

Police had to gather tools and use hand saws to remove the protestors. It took police about an hour to make the arrests.

BLM protestors chained themselves together and blocked the entrance to the police station. Protestors called for a “world without police” and “full divestment from policing”

If Black Lives Matter protestors firmly believed in what was stated in their creed–that they demand freedom and justice for “black people and…all people”—then they should start acting like it. Their actions do not speak for all people. Indeed, their actions obstruct official police business and the opportunity for the police to do their job and protect all citizens.

THIS is not what Martin Luther King, Jr. dreamed. He dreamed of a world where no preference or power would be given based on color.

King would declare that #alllivesmatter.

In the sixties, Martin Luther King, Jr. called on the government to break the chains of discrimination and injustice. Sadly, police of major cities are too distracted by breaking the chains of activists to secure justice for anyone.

If any life matters to BLM protestors—black or white—they should read their history and learn a lesson from one of the greatest Civil Rights activists of all time.