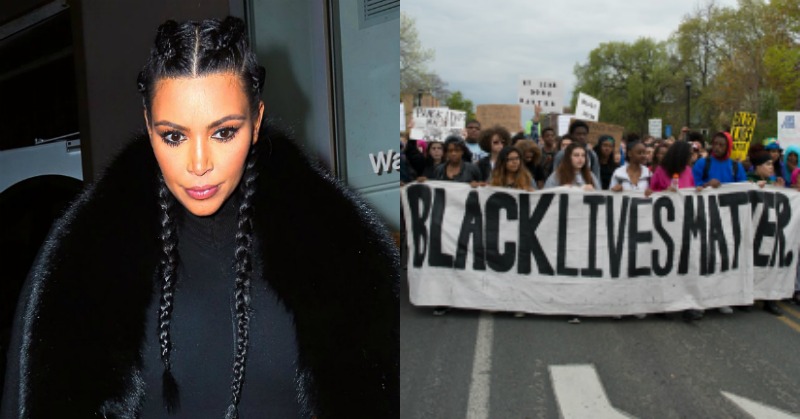 The Black Lives Matter movement has given yet another reason to disagree with them and this one crosses a line — the Kardashian line — by forcing me to side with the Kardashians and I’m not at all happy about it.

The Daily Caller reported that the latest absurd statement by the Black Lives Matter movement involves criticizing celebrities for allegedly “appropriating” black culture by wearing their hair in boxer braids, a.k.a. cornrows.

“Banking on blackness is a shameful enterprise, and the Kardashians are no better than racist judges, prison officials and corporations who make money off the incarceration of black bodies.”

Apparently wearing your hair in braids is trademarked by black people and doing so makes you a racist. Oh, also anyone non-black can’t participate in what they call “blackness.”

Matthews doesn’t stop there, she goes on to add this that black women and hair braiding is a: “ritualistic, a sacred experience black women share with one another dating back to pre-colonial times.”

“[Celebrities] are earning by mimicking our looks, some of which we are berated for wearing in public,” Matthews added.

Matthews claimed that calling out this so called “appropriation” isn’t petulant:

It certainly is petulant and it’s also racist.

Is it “appropriation” when a black woman dyes her hair blonde? How about when they straighten their hair? Should white women be angry? Sorry, forgot about the whole white privilege thing — it’s easy to forget things that aren’t real.

White people aren’t allowed to appreciate or embrace white culture lest be called a racist or a white supremacist. In fact, minority groups often erroneously decry that there is no white culture, a statement that couldn’t be further from the truth.

Black entertainers certainly have no problem with white people buying their products and padding their wallets. White people are constantly told they need to “understand black culture,” but just don’t actually embrace it — according to people like Matthews, that’s racist.

Although I’m loathe to side with the Kardashians, especially given some of the racist and ignorant comments Kim has made (not to mention her husband Kanye West’s treasure trove of ignorant comments) where, in a twist of irony, she defended the Black Lives Matter movement, in this case I have to because the other side is even more absurd.