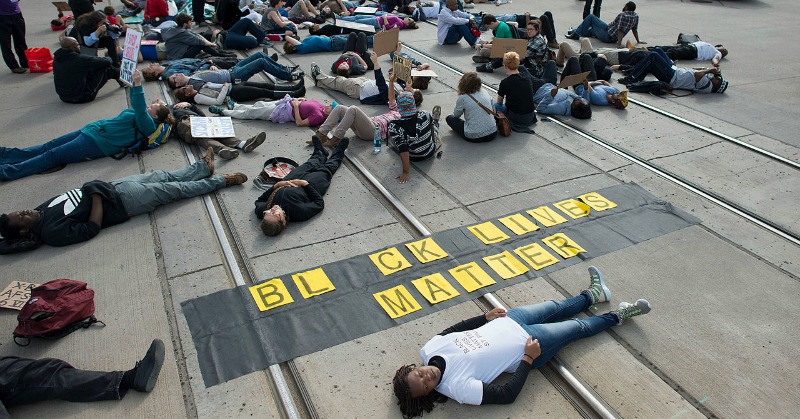 Once again, a Black Lives Matter protest decided to block a street and the inevitable happened — a protester ended up getting hit by a car. What happened next? Gunfire rang out on the scene.

The Associated Press reported that protesters were “peacefully” demonstrating in Ferguson, Missouri on the anniversary of Michael Brown’s death — the black 18-year-old who stole from and strong-armed a convenience store clerk, resisted arrest, tried to wrestle an officer’s gun from him and was subsequently fatally shot by a white officer.

Just a side note, the AP surely didn’t report it this way — they went out of their way to still mention that Brown was “unarmed.” I’m actually a bit surprised their still not going with the long ago debunked “hands up don’t shoot.”

During this “peaceful protest” that blocked a street, a woman drove her car through — hitting a protester.

According to the AP, Sharon Cowan was at the scene and said, “A lady came down and hit a protester – knocked the shoes off his feet. Hit him, and he rolled and he bounced.”

About a minute after the collision, shots rang out in the area. Witnesses say these shots were directed at the vehicle and a spokesman for the city said that the car was covered in bullet holes.

Heather De Mian took this video at the scene and sent it to the AP:

The protests disbanded around 10 p.m. and no arrests were made. The protester hit by the car was carried off to a hospital.

The rest of the AP article goes on to discuss the memorial held for Michael Brown earlier that day.

It also surprisingly mentions how Wilson, the officer that shot Brown, was found to have acted in self defense by the the U.S. Department of Justice after a state grand jury declined to press charges — he ended up resigning anyway in Nov. 2014, no doubt due to the media and Black Lives Matter ruining his career for no reason.

Despite these facts, this incident is what spurred on the Black Lives Matter movement, a movement that clearly doesn’t care about the facts.

This quote from Brown’s father explains it all:

No personal responsibility to be seen here. His son didn’t “build up families,” he stole from a convenience store owner, attempted to wrestle a gun from a police officer — likely intending to shoot him with that gun — and the subsequent fallout ruined that officer’s career.

A Justice Department investigation — because even though the facts in the case showed the officer acted in self defense, lets bow to the will of what the AP admits were “sometimes violent protests — “found patterns of racial bias in Ferguson’s police and municipal court system. The federal agency and the city agreed this year to make sweeping changes.”

I wonder if they found any racial bias in the fact that blacks commit a disproportionate amount of crime — often toward each other — and if any “sweeping changes” are coming to work on that? Probably not, that wouldn’t fit an agenda, like perhaps the Obama administration’s attempt to nationalize police departments?

It’s apropos given how Black Lives Matter began — based on an inability to comprehend facts and a blatant lack of personal responsibility — that they would continue to not understand that standing in the street where vehicles operate at high speeds isn’t a good idea.