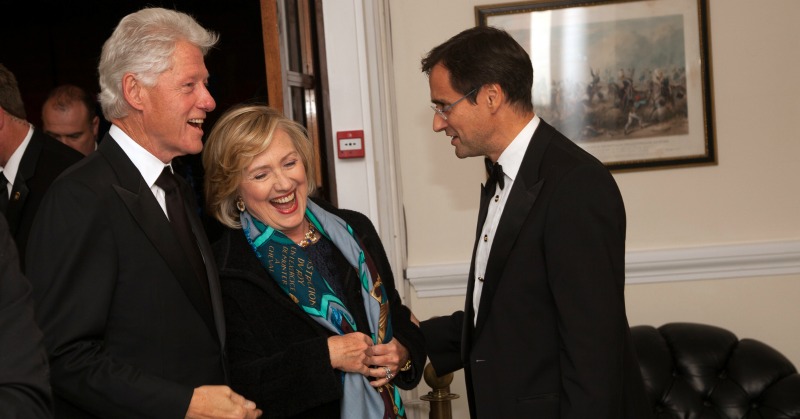 Democrat presidential nominee Hillary Clinton’s corrupt pay-to-play State Department has been detailed in a bombshell report by the Associated Press.

More than half the people outside the government who met with Hillary Clinton while she was secretary of state gave money — either personally or through companies or groups — to the Clinton Foundation. It’s an extraordinary proportion indicating her possible ethics challenges if elected president.

At least 85 of 154 people from private interests who met or had phone conversations scheduled with Clinton while she led the State Department donated to her family charity or pledged commitments to its international programs, according to a review of State Department calendars released so far to The Associated Press. Combined, the 85 donors contributed as much as $156 million. At least 40 donated more than $100,000 each, and 20 gave more than $1 million.

Some of Clinton’s most influential visitors donated millions to the Clinton Foundation and to her and her husband’s political coffers. They are among scores of Clinton visitors and phone contacts in her official calendar turned over by the State Department to AP last year and in more-detailed planning schedules that so far have covered about half her four-year tenure. The AP sought Clinton’s calendar and schedules three years ago, but delays led the AP to sue the State Department last year in federal court for those materials and other records.

While Clinton’s pay-to-play scheme has been widely reported, primarily by conservative media and reluctantly in the mainstream media, the AP reported that this is the first “systematic” attempt to analyze the exchange of time with Clinton for Clinton Foundation donations.

The AP report notes that it did not even include foreign governments in their study, which they claim would be “part of her diplomatic duties.”

This study doesn’t even touch the reports that Clinton allegedly exchanged favors during her time at State for foundation donations. The AP did, however, report some of the figures:

Bill Clinton announced that if he ends up being the first gentleman (try saying that with a straight face) the Clinton Foundation will no longer accept foreign donations and will effectively end its foreign programs.

Douglas White, an expert on nonprofits who previously directed Columbia University’s graduate fundraising management program, said of the massive amount of foreign donations the Foundation has received — $2 billion from over 6,000 donors since 2000:

Most people couldn’t…but Clinton has proven time and time again that she’s above the law, and certainly above ethics. Her top aide, Huma Abedin, edited a radical Islamic journal for over a decade, but Clinton’s spokesman simply claims, eh, no she didn’t…

Clinton hasn’t had to answer for anything, from the four Americans killed in Benghazi to her endangering national security via a private server in her basement to the numerous reports of Clinton bullying the numerous women her husband allegedly victimized over the years — and they are numerous.

The evidence is right there. But even if the legal system doesn’t hold Clinton accountable, the voters have a chance to at least deny her elected office ever again.