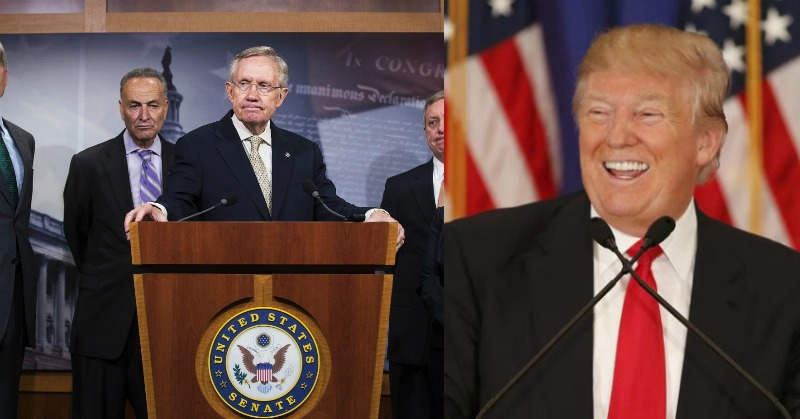 Oh this is too funny. The Democrats pulled their little “nuclear option” stunt and now it has blown up in their faces with a Republican Congress and president. I love it.

CNN reported why the Democrats will have a tough road ahead of them to take on President-elect Donald Trump’s cabinet appointees:

That’s because Senate Democrats muscled through an unprecedented rules change in 2013 to weaken the power of the minority party to filibuster Cabinet-level appointees and most judicial nominees, now setting the threshold at 51 votes — rather than 60 — to overcome tactics aimed at derailing nominations.

With the Senate GOP poised to hold 52 seats next Congress, some Democrats now say they should have thought twice before making the rules change — known on Capitol Hill as the “nuclear option.”

They are planning on making the fight over Rep. Tom Price’s nomination to lead the Health and Human Services Department a proxy war over the GOP’s plans to to dramatically overhaul Medicare. They want to turn Steven Mnuchin’s nomination to lead the Treasury into a battle over regulating Wall Street. And they want to make Sen. Jeff Sessions answer for his hard-line stands on civil rights issues and against comprehensive immigration reform.

Senate Democrats plan to make speeches and mount objections to Senate Majority Leader Mitch McConnell’s efforts to quickly schedule votes to confirm much of Trump’s Cabinet by the time he is inaugurated in January. Under the rules, they could delay votes from taking place for a few days at a time, temporarily slowing down the Trump agenda.

Democrat Sen. Chris Coons of Delaware voted for the rule change and is aw-shucks-ing about it now.

“I do regret that,” he said. “I frankly think many of us will regret that in this Congress because it would have been a terrific speed bump, potential emergency break, to have in our system to slow down nominees.”

Now the only way Dems will be able to really mount an opposition to Trump’s appointments is if Republicans go rogue — something that could happen with some of the establishment Republicans slithering around.

Back in 2013, current Senate Minority Leader Harry Reid, the guy who pushed through the rules change, had this to say:

The changes that we made today will apply equally to both parties. When Republicans are in power, these changes will apply to them as well. That’s simple fairness. And it’s something both sides should be willing to live with to make Washington work again, that is also simple fairness.