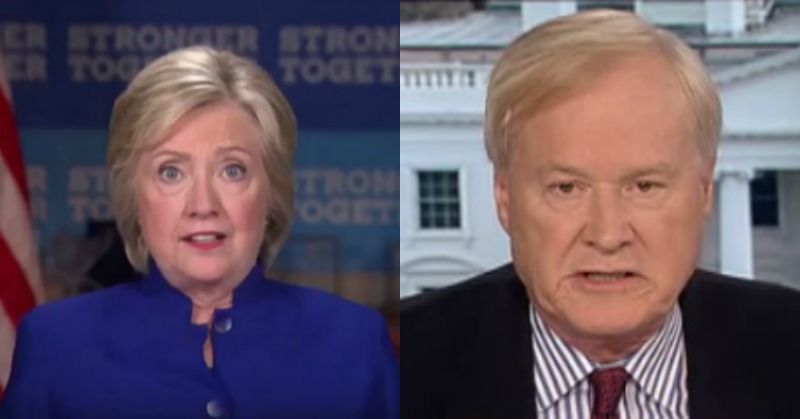 Well, MSNBC’s Chris Matthews surely doesn’t have the same thrill up his leg for Hillary Clinton as he did for Barack Obama. In a recent segment, Matthews appeared to all but endorse Donald Trump.

Here’s what Matthews had to say, courtesy of The Gateway Pundit:

If you like the way things are the way they are headed in this country. If you’d like to continue the destruction of our manufacturing base, and the jobs that went with it. If you like the uncontrollable immigration, if you like the string of stupid wars from Iraq to Libya to Syria. If you want to say yes to all of that, if you want to keep this all the way it is, fine, then vote for Hillary Clinton. If you don’t like the way things are headed you got a chance to really shake the system the system at its roots. If you wake up on Election Day and it’s the same as it is today, if its the same 4 or 5 or 8 years from now, remember you had a chance really change it up but you were to dainty to do it.

Thursday on MSNBC’s “Hardball,” host Chris Matthews said, it’s the Clintons’ “pattern” to raise money “hand over fist” using the White House like a “Motel 6” and that will not change if Democratic presidential nominee Hillary Clinton wins in November…

…“You know what I think? I’m going to be more judgmental than Beth who’s a straight reporter. I’ll make a judgment. Every time I watch a politician engage in a certain pattern of behavior before they go to the White House, they continue to engage in that pattern afterwards. People don’t change because we swear them into the White House. They become that person big-time. And the Clintons were raising money like this hand over hand, hand over fist, back in 1996, using—we called it Motel 6. They were hoarding them in, pulling them in by train loads of contributors and then letting them sit in the Lincoln bedroom for a while and charging them by the hour. You can still vote for Hillary Clinton, but remember, you’re getting this as part of the package, because that’s been their pattern.”

As we also noted here at TFPP, Matthews isn’t the only liberal who is fed up with Clinton. Mika Brzezinski, co-host of MSNBC’s “Morning Joe,” noted how ridiculous it was for the Democrats to nominate someone under FBI investigation.