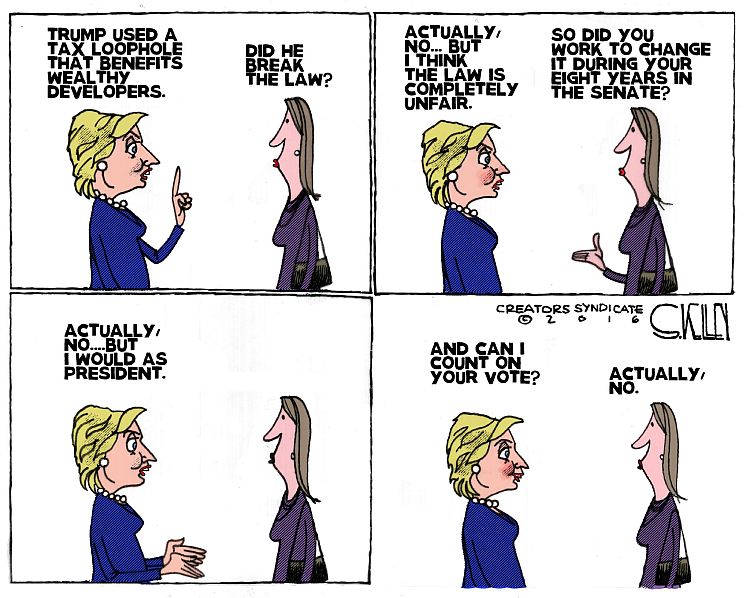 Robert Gehl reports that this is so awkward.

See, when the New York Times breathlessly reported that Donald Trump used the tax code to claim a business loss, which would enable him to not pay taxes for several years, it instantly became the big “October Surprise.”

The rest of the media, leftists and the Hillary campaign – especially the Hillary Campaign – jumped all over this story.

Trump "apparently got to avoid paying taxes for nearly two decades—while tens of millions of working families paid theirs." pic.twitter.com/g62jB9fKr5

Then we find out that The Times also used a similar scheme to avoid paying federal taxes too. Which kind of makes them hypocrites, right?

Now we discover that none other than Hillary Clinton herself also used a federal tax break in 2015 to claim a loss and avoid paying taxes.

Of course, Hillary’s claim of $700,000 is dwarfed by Trump’s near-billion dollar claim, but remember how incredibly wealthy Trump is (or isn’t, depending on when you ask).

Bloomberg Magazine wrote bout how incredibly common this federal tax break is among the very wealthy.

Those 1.1 million folks in the 1 percent, as measured by the TPC, have annual income that averages a little less than $700,000. The top one-tenth of that group, some 110,000 households, average about $3.6 million, according to Howard Gleckman, a senior fellow at the TPC.2

Related: STUDY: The Middle Class is SHRINKING Under Obama

Among the biggest of these givebacks, courtesy of the Internal Revenue Service (well, really Congress), are capital gains and dividends—these are the biggest way the wealthiest benefit.

In other words, their post-tax profit was higher than their pre-tax profit. The explanation in their 2014 annual report is, “The effective tax rate for 2014 was favorably affected by approximately $21.1 million for the reversal of reserves for uncertain tax positions due to the lapse of applicable statutes of limitations.”

If you don’t think it took fancy accountants and tax lawyers to make that happen, read the statement again, Forbes writes.

So there it is. Donald Trump did exactly what every other wealthy person and corporation in America does.

Related: New Map Shows How High US Corporate Taxes Are vs Rest of The World

And Hillary Clinton wants you to think Trump is a cad while she profits from exactly the same thing.