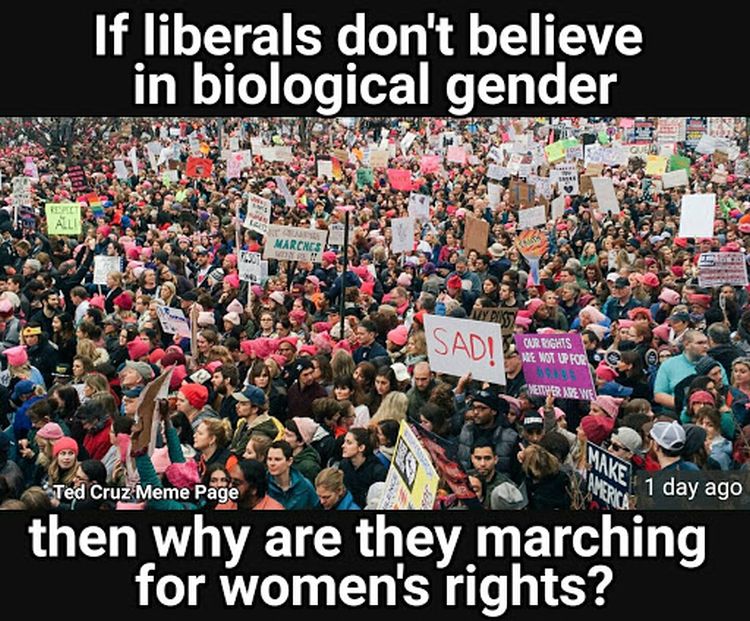 The Washington Free Beacon reports that transgenders are upset at Women’s March organizers because:

Transgender activists are upset that the women’s march over the weekend was not inclusive to biological men who identify as women, as the protest presented an “oppressive message” that having a “vagina is essential to womanhood.”

Saturday’s event to oppose the inauguration of Donald Trump was largely a “white cis women march,” with too many pictures of female reproductive organs and pink hats, according to trans women and “nonbinary” individuals interviewed by Mic.com.

A fight is brewing between “trans-exclusionary radical feminists,” or “TERFs,” and transwomen, according to the article, “How the Women’s March’s ‘genital-based’ feminism isolated the transgender community.”

The women’s march had an over-reliance on slogans and posters depicting gender norms, like using pink to represent women and girls, said some transgender activists who boycotted the march.

“The main reason I decided not to go was because of the pussy hats,” said one transwoman from California. “I get that they’re a response to the ‘grab them by the pussy’ thing, but I think some people fixated on it the wrong way.”

“I believe there’s a lot of inequality that has to do with genitals—that’s not something you can separate from the feminist movement,” the transwoman added. “But I feel like I’ve tried to get involved in feminism and there’s always been a blockade there for trans women.”

The “saturation of vagina-related messages and imagery,” such as a giant hand-knit uterus, “set the tone for a march that would focus acutely on genitalia at the expense of the transgender community,” writes Mic.com staff writer Marie Solis.

The signs referencing Trump’s infamous comments made on a hot mic during an Access Hollywood taping more than a decade ago were too heteronormative, trans activists said.

Signs that said “Pussy grabs back,” “Resistance is Fertile,” and “Pussy Power” sent a “clear and oppressive message to trans women, especially: having a vagina is essential to womanhood.”

The article explained that transwomen are weary of “trans-exclusionary radical feminists.” “TERFs” are people who “equate womanhood with having a vagina” or feminists who “argue trans women are actually men in disguise trying to infiltrate their spaces.”