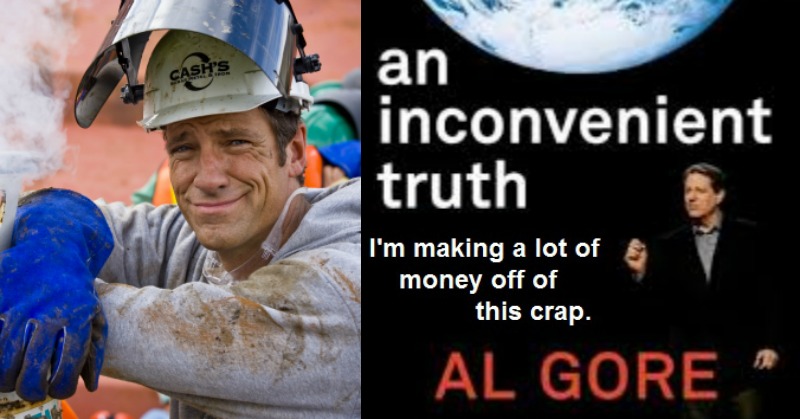 Rowe narrates the show “How the Universe Works” on the Science Channel. Recently, he sat down with climate change supporting scientists at a bar and blew wide open one of the major problems with their position. He detailed the conversation in a Facebook post:

This weekend, in a bar called Grumpy’s, I listened as two professors from Berkeley discussed with great passion the inevitable consequences of ignoring climate change. When I was invited to share my opinion, I shrugged and said, “Beats me, fellas. Last week the smartest people on the planet thought there were 100 billion galaxies in the universe. They were off by a couple trillion. I’m not really sure what’s in store for planet earth.”

I was surprised by their response. One frowned real hard, and stared into his beer. The other asked if I was some kind of “Climate Denier.”

“You know what I mean,” he said. “Are you skeptical of the fact than man is destroying the planet by heating it up to an unnatural degree?”

“I’m skeptical of most things,” I said. “But who cares what I think? I’m just a narrator. You guys are the actual scientists, right?”

“We are,” said the one staring at his beer.

“Well then, tell me this. Isn’t skepticism at the very heart of scientific inquiry?”

“Then how come people who question the claims around global warming are called “Deniers?”

“Because Global Warming is real, and man is causing it. And our planet is in terrible trouble.”

Then the other one chimed in with this. “Right now, this planet is one of the worst places to be in the universe.”

I nodded. “I’m sure you’re right,” I said. “But if it turns out you’re not, and you need someone to walk it back for you – give me a call. I’m in the booth all the time.”

I’m not sure they got it.

I bet they didn’t. Whether you believe in climate change or you don’t, the point Rowe made is simple and extremely important — scrutiny is crucial for good science.

Any good scientist would welcome skepticism. They would welcome questioning and intensive analysis of their theories. That’s how something becomes a fact, and why global warming is far from it.

Global warming does not hold up to strong scrutiny. It simply doesn’t. Again, whether or not man-made climate change is real or not isn’t the issue here, but rather the fact that those pushing it mock, shame, and try to shut down dissent. Why is that?

There’s a lot of money in the climate change hoax. There’s also a big political angle. The government scares people into thinking that the end is nigh and that the only way to turn it around is to cede control to the federal government and allow them to force their economy-killing policies on business.

You know what else it does? It allows them to knock down the west and move toward globalism. Why else would you do something that obliterates the economy based on dubious science? Or any science for that matter. Even if it is true, how much sense does it make to cripple our economy as we watch other economies who have no intention of complying with the restrictions overtake us?

It doesn’t, unless of course there’s something bigger going on.