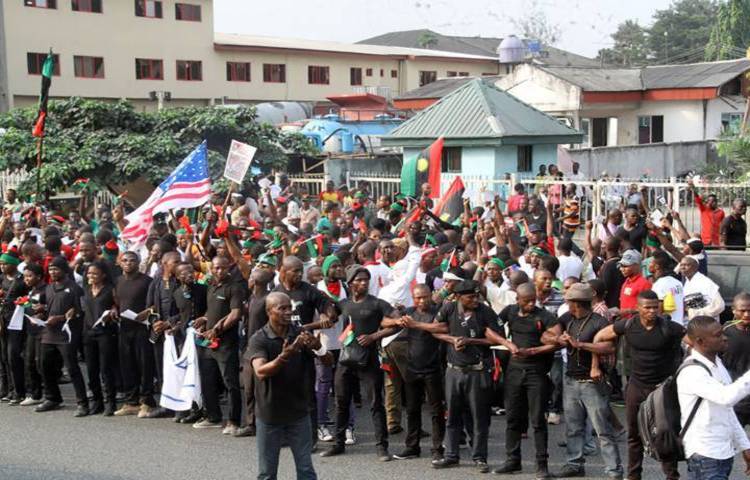 While female rights groups marched in Washington DC and left-wing groups threw cement blocks at Trump’s motorcade as it travelled to the White House after the inauguration, a pro-Trump group from the Southern Rivers state in Nigeria held a rally of their own across the world.

Local reports that started coming in late Friday suggest Donald Trump supporters came to blows with police and security forces as they were celebrating the new President being sworn into office, with 65 people being arrested and dozens more killed.

The Indigenous People of Biafra clashed with police officers as they marched through the streets of Nigeria waving American flags and shouting anti-Nigerian government slogans.

A spokesman for the group claims 20 people are dead and 200 more are still missing.

A Nigerian separatist group says the death toll has risen to 20 after a demonstration in support of U.S. President Donald Trump turned into clashes with police.

Friday’s demonstration in southern Rivers state was organized by the Indigenous People of Biafra, which wants Trump to support the creation of an independent Biafran state for the Igbo people.

Member Ugochukwu Chinweuba said Saturday that lawyers were working to locate and release those arrested by police. He said more than 200 people remained missing.

Nnamdi Omoni, a spokesman for Rivers state police, denied that anyone was killed but said 65 people had been arrested.

“To the best of my knowledge, there was no casualty as the police merely employed minimal action, which involved the use of tear gas to disperse protesters,” he said, but neither of the competing accounts could be independently verified.

Pro-Trump supporter Ugochukwu Chinweuba claimed lawyers are working to locate and release those arrested by police.

Chinweuba said he supported the new American President because he wanted “self governance” for his region, something the Nigerian government strongly opposes.

In the 1967-70 civil war, one million people died over efforts to create a Biafran state.

While Nigerians are actually standing up and protesting for their own freedom, Democratic Americans are choosing to be violent and destructive over the free and fair election that chose who would be our President for the next four years.

Third world countries such as Nigeria would be extremely thankful for the freedom we Americans have, and here the leftists are whining about their first world problems.

Imagine the riots from the Left if police shot and killed any of the protesters that were out on the street during and after Trump’s inauguration. We’d never hear the end of it.

We truly are blessed to live in such a free country, and it’s about time the destructive leftists we saw on the streets last night start showing some gratitude.